The fastest-growing ecommerce markets in Europe

November 7, 2017 by Ecommerce News. About Statistics with tags Europe, Italy, The Netherlands. 27488 views.

The Netherlands and Italy will be the fastest-growing ecommerce markets in Europe during the next five years. In both countries, the online retail industry will increase by 14 percent every year until 2021. Turkey is another fast-growing ecommerce industry in Europe, with a projected compound annual growth rate of 13 percent.

These are some of the results from a global research study conducted by Worldpay. As part of the study, it released some market guides about different countries across the globe. In Europe, it has handy information and ecommerce market predictions about the United Kingdom, Norway, Sweden, Denmark, Germany, the Netherlands, Belgium, France, Spain, Italy Poland, Russia and Turkey.

Ecommerce in the Netherlands

According to Worldpay, the Netherlands have an ecommerce turnover worth 25 billion dollars (21.6 billion euros) this year. And this is estimated to grow 14 percent every year, until it’s worth over 36 billion euros by 2021. “From 2015 to 2016, ecommerce in the Netherlands grew to more than 11 percent of total retail sales. Already quite high, internet penetration remained stable at 94 percent of the population, so it is unlikely that ecommerce will grow through increased access to the internet alone.”

In Italy, ecommerce is – just like in the Netherlands – estimated to be worth about 21 billion euros and is also predicted to show a compound annual growth rate of 14 percent, meaning it will probably be worth over 36 billion euros by 2021. Worldpay said the following about ecommerce in Italy: “Mcommerce grew from 12 to 17 percent of total ecommerce sales last year, with a quarter of these being cross-border imports. Overall internet penetration has increased by 14 percent over the last five years, and there’s still room for it to improve further, revealing more opportunity for growth as Italians gain access to ecommerce.” 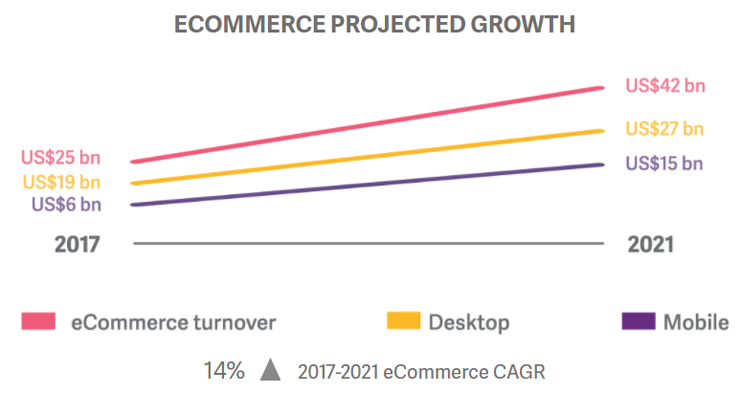 Growth of ecommerce in Europe

The predicted compound annual growth rate per country in Europe: