Half of Nordic consumers want to choose the delivery method

Consumers in Sweden, Norway, Finland and Denmark shopped online for a total of 3.89 billion euros during the first three months of this year. Ecommerce increased by 7 percent compared with last year, although the Norwegian ecommerce showed some negative development. Nordic consumers are increasingly valuing the power of the recipient and want to choose the delivery method of the items they bought online.

Especially, ecommerce consumers in Sweden value the power of the recipient. Three out of four consumers think it’s important they are free to choose how a product they ordered online will be delivered, whether it be to a special collection point, to an unmanned locker or directly at the door.

And almost half of all people in the Nordics think it’s very important to be able to choose the delivery method of their purchased packages. This can be concluded from PostNord’s latest report called “E-Commerce in the Nordic Region“. It also shows that recipient power is valued highest in Denmark, where more than one third of online shoppers say it’s very important they can choose how an item will be delivered.

Delivery time in the Nordics
Also, the survey shows how in Denmark and Sweden, about one in three online consumers expect their purchases to be delivered within three days. In Norway, this same delivery time is expected by one in four consumers, while in Finland the people seem to be more patient. One third are open to waiting up to five days.

Getting your goods in time is one thing, another important factor is how they will be delivered. Preferences vary among the countries surveyed. However, the most popular delivery option is picking up the items from a partner outlet. In Sweden, Norway and Finland, about half of all consumers want to pick up the item themselves, while in Denmark, home deliveries are more popular. Only one in five consumers like to go to a service point to pick up the items they ordered online. 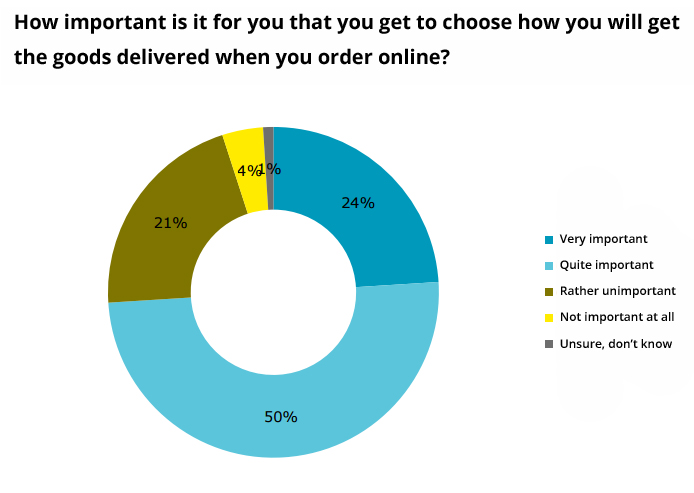 Drop in number of ecommerce consumers in Norway
The population in the Nordics shopped online for a total value of 3.89 billion euros during the first quarter of 2015. This is an increase by 7 percent when compared with the first quarter of 2014. “The increase was not greater because Norwegian ecommerce had negative development during the quarter compared with last year”, the study says. “In Norway, both the number of ecommerce consumers and the value they spent dropped. It is too early to say whether this development is a trend reversal for ecommerce or only a temporary variation. However, the consumption of goods by Norwegian households during the first three months of the year was relatively weak.”

Popular shopping devices and product categories
The results from the survey show that most people in the Nordic countries still shop online using their computer, although more and more are shopping using their mobile phone. The percentage of the latter is still the highest in Sweden where 17 percent shopped online via a smartphone.

The most common goods to buy online vary per region, but in Sweden and Norway it’s mostly media such as books, magazines and CDs. In Denmark and Finland, clothes and shoes are popular items to shop online. 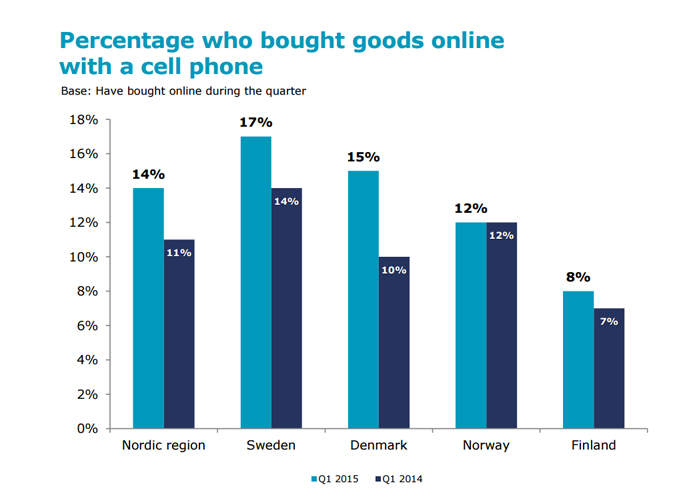