Hermes will pay for neighborhood deliveries

Logistics company Hermes has launched a pilot project, called PaketFuxx, in which consumers who regularly accept parcels for neighbors are paid 30 cents per package. Hermes will also pay this money if the goods are delivered by another company.

As the number of parcels being delivered keeps on growing, and recipients are found at home less and less during the day, Hermes wants to introduce a compensation model for neighborhood deliveries.

A so called PaketFuxx (“Parcel fox”) is a person in a neighborhood who accepts parcels for neighbors who aren’t at home at the time of delivery. These PaketFüxxe will get 30 cents per package, even if these are delivered by another logistics company.

“We have developed PaketFuxx based on the customer and his needs”, Dennis Kollman, Chief Sales Officer of Hermes Germany explains. “This is why parcel recipients can specify a Paketfuxx as delivery address when they order online, regardless of which company delivers the parcel.”

Service provided on a transaction basis to other companies?

For now, Hermes pays 30 cents, also for deliveries by competitors. “If the establishment of a relevant network of PaketFüxxe succeeds, it is an option, for example, to offer the use of this service on a transaction basis to other delivery companies or online retailers. With the PaketFuxx service, we want to become a serious alternative in the checkout process of online retailers”, he adds.

We want to become a serious alternative in the checkout process.

Pitot project has been expanded

The pilot project was initially only tested in Nuremberg, but has now expanded to cities such as Berlin, Leipzig and Dresden. 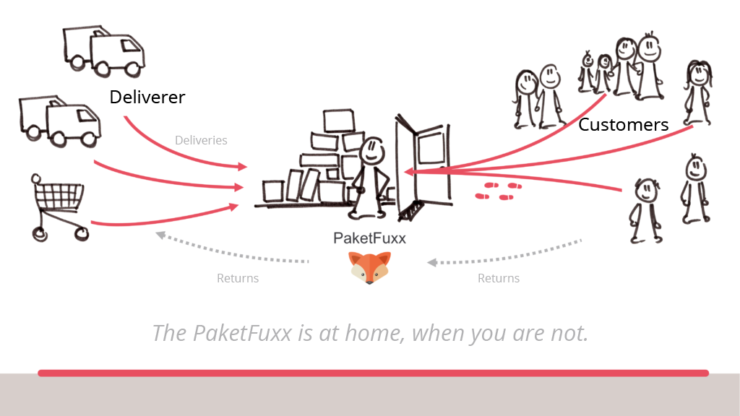