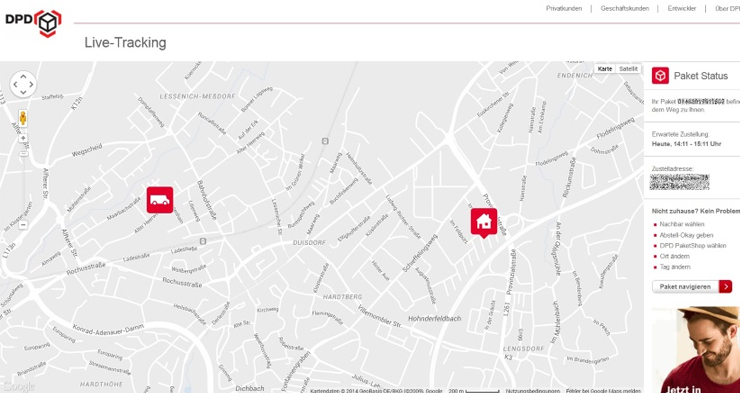 In an attempt to satisfy customers, logistics companies are increasingly improving the service of delivering parcels. One way to achieve this, is by letting customers see how long it will take to get the order delivered at their homes and to show them on a map where the parcel courier is. But does this service really adds value or is just a gimmick?

During the summer of 2014, DPD launched Live-Tracking, a tool that shows customers where there parcel is and how long it takes before the parcel courier rings the bell. On Netzaktiv, a weblog from German online store software provider VersaCommerce, there’s a comprehensive review of this DPD service. Author Dr. Katja Flinzner tested the live tracking service and discovered it has had its benefits and its drawbacks.

Logistics is biggest bottleneck in ecommerce
“Logistics is known to be the biggest bottleneck in ecommerce. Since no online store can function without a logistics partner, online stores also benefit from the continued growth in this industry. And so, it’s no wonder that the large logistics companies are now taking every effort to deliver the most diverse methods in order to differentiate themselves from their competitors”, she writes.

She states that Hermes for example, has announced a service with a smaller time window last year, but so far it hasn’t launched yet. DPD made a similar announcement, but their service is up and running now. And they even went further. Last July, the company announced they can give a precise delivery time up to 30 minutes in advance and that customers are able to check where the DPD van is via live tracking.

So far, so good
Now the service is running for almost half a year, Flinzner decided to test DPD’s live tracking tool. After she placed an order, she received one mail from the online store and one from DPD saying she will receive her order in one or two business days and that she will receive more precise information about the transport on the day of delivery. They also let her know she can change the place and date of delivery and that she can give authorization to have her package delivered to a neighbor or a nearby pick-up point. “That sounds quite flexible. So far so good”, she writes.

The next morning she gets an email from DPD that states she will get her package between 14:11 and 15:11. “That’s not yet a 30-minute windows, but after rereading the DPD press release I’ve noticed the 30-minute window only happens during the course of the delivery.” So only when the parcel courier is already on its way, it’s possible to give a precise delivery time up to 30 minutes in advance.

Map doesn’t show relevant information
When Flinzner checks the live tracking tool, she notices the DPD van is really close to her home. But as it’s only a 5 minute ride now (based on the distance between the van’s location and Flinzner’s house), the tool indicates it will take at least another hour before the van will stop by her house. “And this is the first problem of this service. What good does it do to know that the DPD driver is just a kilometer away delivering packages? I have no idea how long it takes, as I don’t know what his exact route is and how many packages he has to deliver”, she says. “According to DPD’s press release, the live tracking tool should indeed reveal the number of stops that have to take place before the chauffeur arrives at my home, but I can’t find this info anywhere on the website.”

“The live tracking tool also shows that there is probably no way to know exactly where the DPD van is, because when the delivery truck icon is only three blocks away, it suddenly jumps back to a distance of 2 kilometers away from my home. But after a few minutes he’s probably at my door, because the door bell rings. It’s 14:39, so pretty much in the middle of the announced time window. A few minutes later, the system knows the package was delivered and live tracking is no longer available.”

The author thinks live tracking has its quirks. “It doesn’t tell the customer anything he didn’t know beforehand and the monitoring of the DPD van on the website is actually not much more than a nice gimmick.” She continues: “Conversations with DPD drivers also bring a lot of other aspects from the new technology to light. Not only do they feel observed, they are often also worried that the constantly retrievable knowledge of their location can be misused by people trying to attack the van. “Many chauffeurs have already had a bad experience. And what consequences will time tracking have for the employment relationship?”

“DPD could probably do easily withouth the gimmick of live tracking, without losing real value for its customers. And after all, DPD would still be a step further than their competitors, as the time window prediction seems to work fairly reliably, as four other packages got delivered in the announced time windows.”