Many complaints about click-and-collect during Christmas

Four in ten shoppers in the United Kingdom used click-and-collect during the Christmas period last year, but 36 percent of them encountered issues with their click-and-collect orders. It’s no surprise more than three-quarters of UK shoppers say they would be likely to switch to shopping with another retailer next Christmas as a result of a poor online shopping experience.

Click-and-collect is a very popular delivery method in the United Kingdom and its popularity continues to grow as an increased number of adults used this service last Christmas. But during the recent festive period, this delivery method was not considered as convenient or easy as shoppers hoped it would be.

That stems from JDA’s Christmas Customer Pulse Report. It shows how 41 percent of online Christmas shoppers chose to pick up their orders in-store, which is 2 percentage points more than in 2014. A quarter of these people said they plan to use this service again in 2016, as for them it’s a way to avoid delivery charges (said by 56%) and it’s convenient (49%). But 36 percent of Christmas shoppers who used click-and-collect encountered issues with their orders.  And altogether, 77 percent  of UK online Christmas shoppers said they would be likely to switch to shopping with an alternative retailer next Christmas as a result of a poor online shopping experience during this festive period last year. 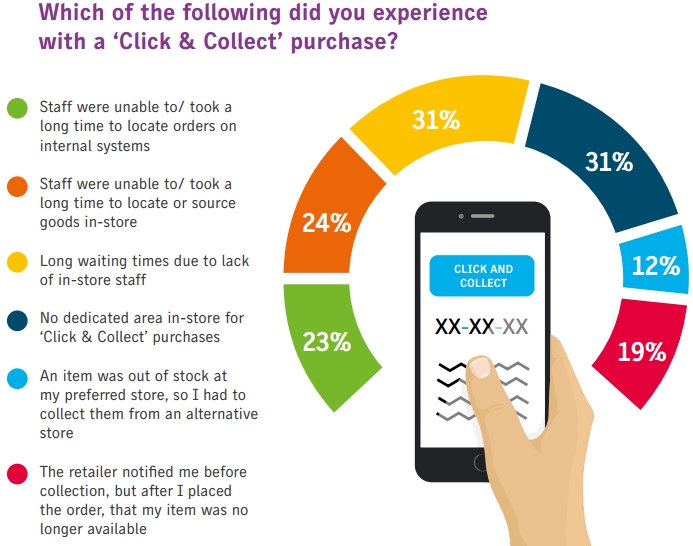 Lack of staff and difficulty in locating items
Of those people who had complaints about their click-and-collect experience, the majority of the issues related to problems in-store during the collection process. Long waiting times due to lack of staff (31%) and difficulty in locating the items in-store (24%) were some of the biggest problems. JDA says: “These results suggests retailers need to improve their staff training around click-and-collect procedures and to better schedule their in-store employees to service customers collecting their goods, especially during peak collection periods.”

‘Retailers risk damaging customer relationships’
“While issues with home deliveries are nothing new, more worrying for many retailers is that this Christmas exposed cracks in their click-and-collect operations”, JDA says. “Without the effective management of staff, stores and inventory, retailers risk damaging customer relationships. Ironically, at a time when the online channel continues to grow, the in-store experience is becoming ever more important.”

In April 2015, a report was published that showed 73 percent of UK online shoppers said they used click-and-collect services, with another 10 percent saying they intend to use the service in the near future.