June 29, 2016 by Ecommerce News. About Mobile with tags The United Kingdom.

Ecommerce in the UK is set to reach 81 billion euros in 2016, partly due to an impressive growth in smartphone-based buying. Mobile ecommerce is expected to be worth 30 billion euros this year, which is an increase of more than 25 percent compared to last year. 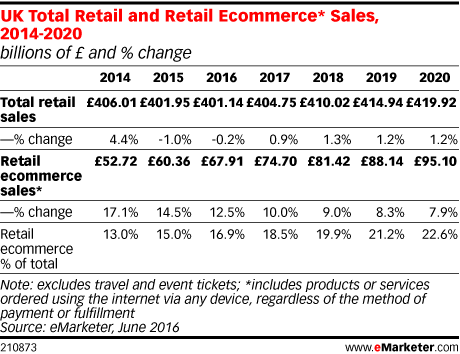 Double-digit growth for mcommerce in UK

This year, expectations are mobile commerce sales will account for 30.48 billion euros, an increase of more than 25 percent. This industry will continue to show double-digit growth for the next couple of years, and by 2020 mcommerce is expected to exceed 51.4 billion euros. 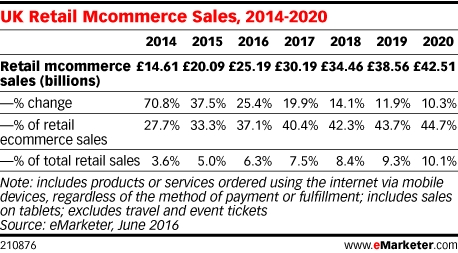 Mcommerce via smartphone is gaining ground

Most of the mcommerce sales in the United Kingdom come from tablets. This year, about 19.1 billion euros was spent via tablets, thereby representing more than 62 percent of all mcommerce sales. But that’s not to say the smartphone doesn’t play a role, shopping via a mobile telephone is quickly gaining ground. It now accounts for 36.4 percent of all mcommerce spending in the UK, but by 2020 its share will grow to 52 percent and sales of 26.7 billion euros.

Note: On Ecommerce News, we write our articles in euros. The source of the article above used pound sterling. We converted all £ prices in € prices, using the current exchange rate (1 British pound = 1.20 Euros).