Mobile commerce in Europe is an industry that’s showing different results per region. Mcommerce is for example more popular in the eastern and southern part of Europe than it is in Northern Europe or Scandinavia. In 2015, research by PayPal showed that in Turkey 53 percent of online shoppers have bought online via a smartphone in the twelve months prior to that study, while in the Netherlands this share was just 17 percent.

Online retail is an ever moving industry and in Europe this is no different. There are very mature ecommerce markets, such as those in the United Kingdom, Germany and France, and there are ecommerce industries that are still developing rapidly, such as in Greece or Hungary.

With mobile commerce, the situation is even more different, as it’s not only about how used to online shopping consumers are, but also whether they have a smartphone or tablet and if they use these for such online activities.

Share of online shoppers in Europe who buy online via smartphone

In 2015, Paypal did research on the mobile commerce industry in Europe. It found out that in Turkey, 53 percent of online shoppers have bought online via a smartphone in the twelve months prior to that research. But in other countries, this share was much lower: for example, in the Netherland it’s 17 percent and in France and Sweden it’s both 21 percent.

In the same research, Paypal expects mobile commerce to grow strongly in Europe. Most growth can be expect in the Nordics, where growth rates of more than 50 percent are expected. Italy and Russia however have the lowest growth rate expected. 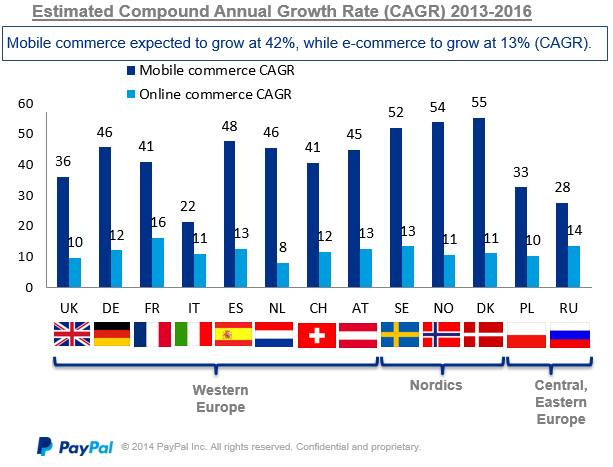 Research from RetailMeNot in 2015 showed that Europeans were set to spend about 45 billion euros via mobile devices that year. Compared to 2014, that corresponds with an increase of 88 percent.

The company also looked at the preferred devices for online shopping. In the more mature ecommerce countries, such as the United Kingdom or Germany, there’s a significant part that used a smartphone (UK: 11%, Germany: 10%) or tablet (UK: 8%, Germany: 7%) in 2014. In countries such as Poland or Italy, the total mobile share was much lower (Poland: 8%, Italy: 7%).

Aside from all the differences per country, according to data analyzed by Twenga, Europe is still the continent with the highest mobile penetration rate. In Central & Eastern Europe it’s 151 percent, while in Western Europe it’s 129 percent. That’s significant higher than in North America (101 percent) or East Asia (92 percent). Online spending on mobile device has doubled between 2014 and 2015, reaching a share of 25 percent.

If you want to read more about mobile commerce in Europe, you should check out our mobile commerce category, which lists all the articles we’ve written about this topic.