Online sales of glasses is booming in Germany

More and more people in Germany buy their glasses online. The online sales of glasses and lenses have made quite a jump last year, although the share of total sales in the sector is still low. And it seems not all opticians are happy with the success of selling glasses online.

The online sales of glasses has recorded a revenue growth of 27 percent to around 210 million euros. That’s a terrific growth, but the online share of total sales in the glasses and lenses sector (worth 5.6 billion euros) is still relatively low, with 3.75 percent.

According to the Zentralverbandes der Augenoptiker (Central Association of Optometrists), around 650,000 glasses were sold online last year. For comparison, in physical stores more than 11.5 million glasses were sold.

Not all opticians happy with glasses bought online
The ZVA surveyed its members this spring and asked them about the online competition. From 850 respondents, 44 percent said they had customers who came into their business with glasses they bought online and that needed adaption, correction or repaid. However, 15 percent of the opticians refused to make an adjustment, while 17 percent declined to repaid the broken glasses. The majority delivered the desired service and charged the customer for the usual fee.

More than half of respondents (56%) also said there was no increase in the number of customers who bought their glasses online and went into the physical store to get it repaired, corrected or adapted. But 64 percent said consumers occasionally mentioned the cheapest online deals when talking to the retailer.

The pricing, the far-reaching offer of glasses and the (lack of) service online are some of the factors people talk about when comparing physical opticians with online retailers selling glasses and contact lenses. But a study called “Stiftung Warentest” showed that it’s neither the service nor the quality that shows a difference between glassed sold online and those sold offline. The ZVA doesn’t agree: it says stationary opticians do not only provide advice, but they also select the best frames and glasses tailored to the needs of the customer’s eyes.

It’s not only in Germany where the online glasses sector is blooming. Recently, Daniel Rothman, CEO of online retailer GlassesUSA, said that eyeglasses are a 1 billion dollar market in the United States, “although currently only 3 percent of the purchases are online, compared to 20 percent for contact lenses. That number is going to grow phenomenally”.

Online sales of glasses has potential in Europe
And last year, MyOptique’s CEO Kevin Cornils said: “The offline European optical market is valued at over €25 billion today. However, while over half of consumers now buy books online, and nearly 20 per cent of apparel is now bought online, only 2 per cent of people currently buy their glasses online – meaning that the potential is massive as consumers follow the trends in other categories.” 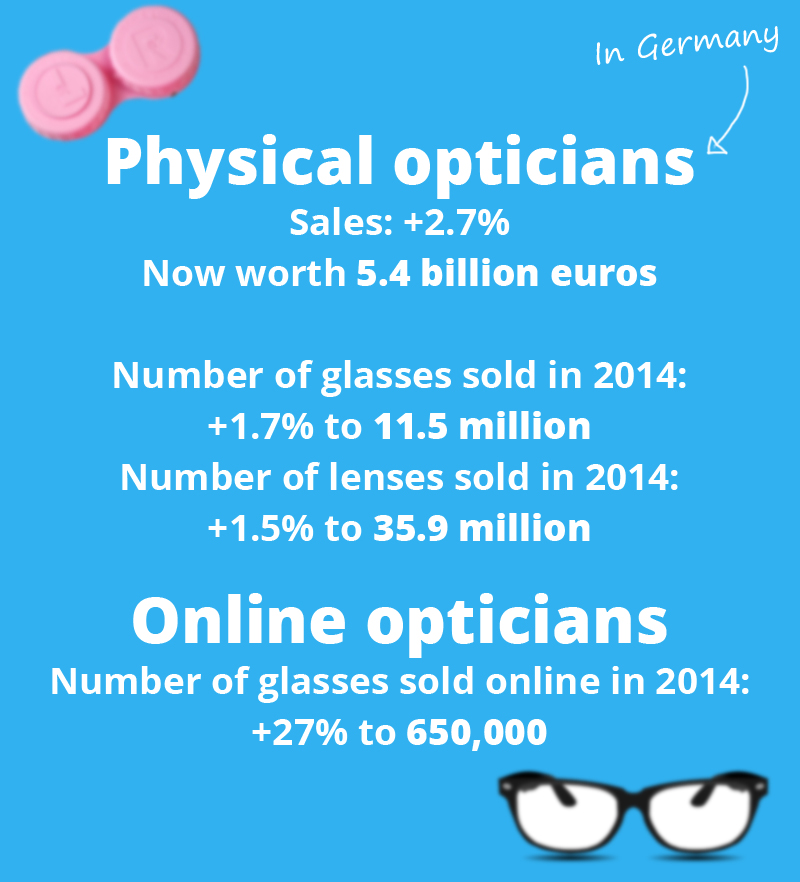