February 15, 2021 by Ecommerce News. About Cross-border with tags France, Germany, The Netherlands.

Picnic has shown strong growth in 2020 and is busy with the expansion to France. Sources say that last year, the Dutch online supermarket had managed to double its revenue, which is now predicted to be worth almost half a billion euros.

With the outbreak of the coronavirus, online shopping got a real boost, which led to more consumers ordering their groceries online. Picnic has benefited optimally from this and saw the number of new customers, orders, and turnover increase significantly.

Sources tell the Lebensmittel Zeitung that the online revenue of Picnic has doubled in a year’s time: from 232.7 million euro in 2019 to 470 million euros last year. 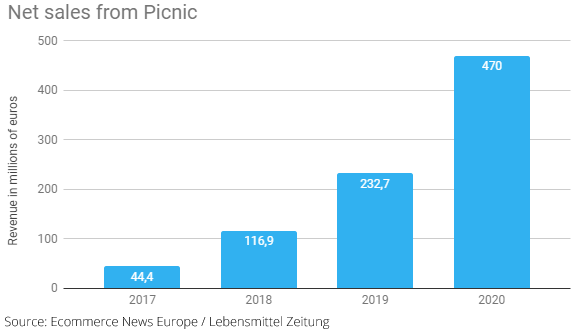 Almost 10 percent of Picnic’s revenue in 2019 comes from Germany, where at the time its sales increased six-fold to 22 million euros. Here, the Dutch company is still only active in North Rhine-Westphalia, with a focus on the Ruhr area.

Picnic has not only seen its turnover increase in recent years, but losses have also grown. Before-tax, it amounted to 73 million euros in 2019. However, the losses have grown less rapidly than the turnover, which according to Lebensmittel Zeitung is seen at Picnic as a significant improvement in profitability. The company’s value is now estimated at 1 billion euros, although Picnic itself didn’t comment on the figures.

The company’s value is now estimated at 1 billion euros.

The only thing Frederic Knaudt, CEO of Picnic Germany, wanted to say is that the company continues to grow rapidly. It has already opened three new hubs this year, in Dinslaken, Düsseldorf, and Oberhausen, and the fourth will follow shortly, in Dortmund. And next month, it will open the doors of its largest distribution center to date, in Langenfeld.

After the Netherlands and Germany, Picnic is more than ready to attract consumers from other countries across Europe. Co-founder Joris Beckers once had his mind on the United Kingdom, Spain, and France, but that first market is, due to the Brexit, no longer an option anymore, it seems. Expansion in the European Union alone is more likely and the focus seems to be mainly on the large countries.

Everything is now pointed to Picnic expanding in France. Earlier this year, the ecommerce company founded the subsidiary Picnic SAS in Paris for this purpose. The supermarket is also looking for French-speaking staff, such as recruiters, business analysts, and social media workers. Picnic will operate from the northern region of Hauts-de-France around Lille, close to the border with Belgium.

Lebensmittel Zeitung writes that Picnic in France, as in other markets, must use a different wholesaler than Edeka, with which it works closely together in Germany. Contracts in France will be closed with Picnic’s purchasing company Everest, of which Edeka is a major shareholder.

Meanwhile, Edeka is still planning to expand its 10 percent stake in Picnic International. According to the plans, the company’s stake in Picnic GmbH, owned by Edeka Rhein-Ruhr, will be transferred to the Edeke headquarters and then converted into an international stake. Edeka Rhein-Ruhr currently owns 35 percent of Picnic Germany, but it has acquired the option to take over the majority in the course of this year.