October 5, 2015 by Ecommerce News. About Marketplaces with tags Germany. 3953 views.

eBay has started a pilot project in Germany, which should give a boost to local commerce. The pilot project called “Monchengladbach on eBay” is intended to allow retailers to offer their goods alongside the existing distribution channels on eBay.

The online hub is a collaboration between eBay and mg.retail2020, a project of Monchengladbach Economic Development and eWeb Research Center of the Niederrhein University of Applied Sciences. It should allow local shopkeepers to respond to the changing buying patterns of consumers and to be able to offer their products, alongside the existing sales channels, on the online marketplace of eBay. On the homepage about 50 retailers sell a total of around 200,000 items, Internet World writes. 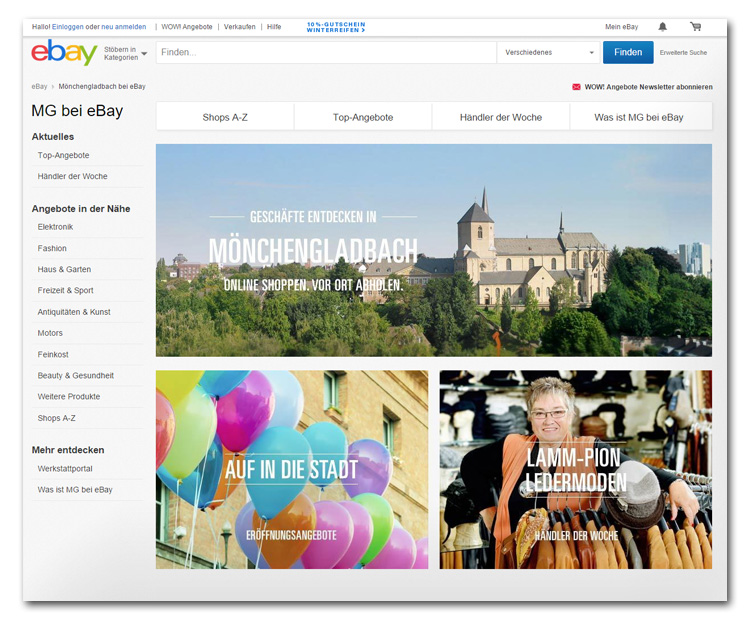 Traders address the challenges they need to face
Customers can choose between different payment methods and delivery options. The purchases can be paid online and delivered to the customer’s door, but with click and collect it’s also possible to pick up the goods in store and pay the retailer there. “Monchengladbach on eBay shows us that our traders address the challenges they face after changing demands of customers and the increasing digitization”, says major Hans Wilhelm Reiniers. “We are pleased that our city is a pioneer in the sustainable development of city centers and a pilot site for the urban retail industry in Germany.”

The pilot project isn’t something that just started. It’s the result of an examination of the two previously mentioned institutes. “Our findings have shown that consumers don’t just think ‘online’ or ‘offline’. Rather, they appreciate the interdependence of the two channels”, says Gerrit Heinemann, head of the eWeb Research Center. Consumers often check a product in store before they decide to purchase it. And the other way around, some consumers like to check online if a product is on stock in store.

The project will initially run until mid-2016.