Foodpanda received another 20 million dollars (€14,8mln) in funding from a group of investors. With this new investment Foodpanda, and its affiliated brand Hellofood, will try to expand its global presence. The goal is to roll out to over forty markets by the end of the first quarter this year.

Foodpanda expanded into twenty more countries last year and also launched their mobile app for iOS and Android. In the next few months the online food delivery service will expand to eight new markets: Croatia, Bulgary, Serbia, Slovenia, Kazakhstan, Azerbaijan, Tanzania and Uganda. If you think these markets aren’t the most popular ecommerce destinies, then you’re right. Foodpanda has a thing of launching its service in emerging markets. For example, in Latin America they are active in countries like Brazil, Mexico and Argentina, while in Europe they have websites running in Russia, Poland and Romania.

Expanding within existing markets
Ralf Wenzel, co-founder and global managing director Foodpanda, says thanks to the trust from experienced investors the company will be able to continue its growth strategy to become a “truly global internet brand”. They will push their expansion within their existing markets, so there are presence at every corner of every country they’re active in. ”We continue to invest in customer service, creating the most convenient way to order food – no matter where you are.”

Foodpanda is partners with more than 22,000 restaurants worldwide and as a result of this customers can choose their favorite meal online, while Foodpanda processes the order directly to the restaurant, which delivers the meal to the customer. Foodpanda was initiated by the German startup incubator Rocket Internet and is comparable to GrubHub in the United States of Just-Eat or Delivery Hero in Europe.

Funding, funding, funding…
Nine months ago Foodpanda also received over 20 million dollars in funding. Phenomen Ventures was among one of the investors and is now with the recent funding also one of the main investors. A few months later it brought iMENA Holdings on as a partner and investor in its Middle Eastern operation. 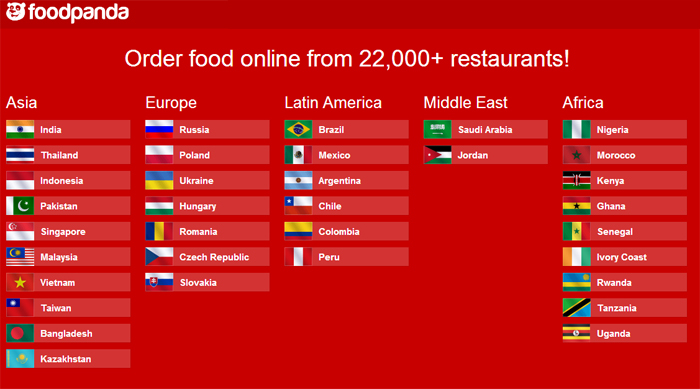