Starship’s delivery robots set to be deployed in London

February 23, 2016 by Ecommerce News. About Logistics with tags The United Kingdom. 5925 views. 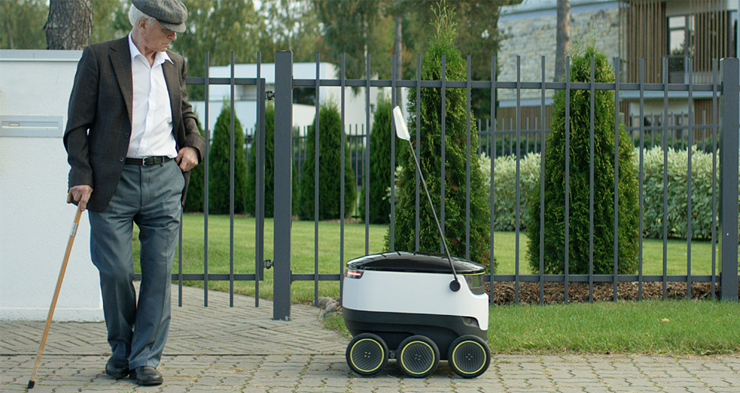 The wheeled drones from Starship Technology have been tested in central London and are set to start being deployed in the UK capital later this month. After 3,000 hours of testing the self-driving boxes will undertake local delivery trails in Greenwich, part of South-east London.

In November 2015, we wrote about startup company Starship that revealed its delivery robot. Back then, it had been running experiment for over six months in Estonia. Now it just finished running tests in London and the company is ready to use its robot car for delivering parcels.

Starship Technologies COO Allan Martinson told the Standard: “We went to the South Bank on a Saturday, near to the London Eye, where it is crowded are lots of tourists and we didn’t have any problems with pedestrians or cyclists.”

Spotted @StarshipRobots delivery robot in North Greenwich today – did I hear first delivery is
in about a week! pic.twitter.com/tYB89LHviS

The specs of Starship’s delivery robot
The robot car weighs about 9 kilograms and is able to hold a similar weight worth of goods. “It can’t hold a flat-screen TV but it holds three bags of groceries or two pairs of shoes”, Keith Cornell, the company’s senior advisor, explains. The ground drone contains a battery that lasts for about two hoards and the delivery range will be up to 30 minutes away base, guided by GPS. It travels at up to 6.5 kilometers per hour and is programmed to avoid obstacles; it can hop up curbstones and over cobbles. The robot also knows to wait if they are about to encounter a large group of people so they can pass.

The delivery robot is locked throughout the journey and can only be opened by the recipient via their smartphone. The driving drone has nine cameras which can capture the face of someone who is trying to steal or damaging the robot. And if that’s not enough to put them off, the robot also has a microphone and speaker to warn them off.

Starship Technologies hopes its robots can replace the need to shopping trips, which is currently the purpose of one third of British car journeys.