“Swedish online retailers need to do more with mcommerce” 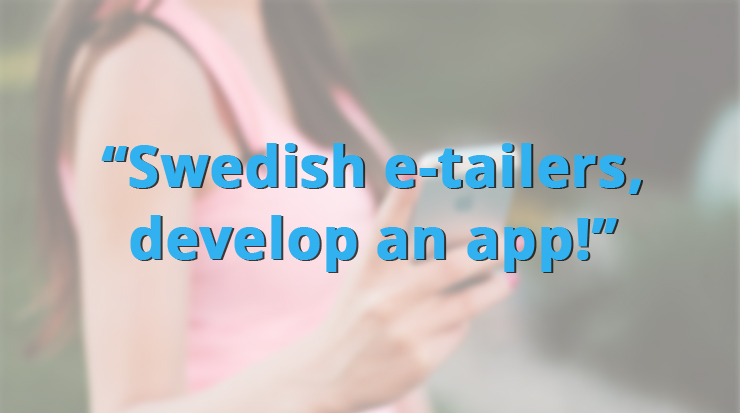 With Google now punishing websites that aren’t mobile friendly, online retailers are in a hurry to have a mobile optimized website. But it’s not solely the mobile website online retailers should worry about, it’s the mobile app that normally leads to more conversion. But in Sweden, many retailers don’t have an app. And that could be a problem.

That’s what Stefan Lundell from Swedish news site Breakit says in his news analysis. “The last couple of days, social media got enriched with yet another buzzword: Mobilegeddon. That’s off course all because of Google who has begun rewarding mobile-friendly sites in its mobile search results”, he writes. This had created some panic among all those online retailers that have not adapted their websites to the mobile experience.

“Obviously, any online retailer with the ambition to grow, needs to have a website that ranks well in Google, even on mobile devices. But far more critical to an ecommerce merchant’s success is to have a mobile application. This week I met one of Sweden’s most succesful online retailers and he was also honestly surprised at how many of his competitors didn’t had their own mobile app. ‘He who is quickly out here with an app can take significant market share’, the man said.”

Conversion via mobile websites is low
“The big deception among online retailers right now is that the conversion of mobile is extremely low. Or put more simply: very few mobile visitors end up buying something. And now that an increasing part of potential customers enter the online store via mobile phone, the weak conversion is a direct threat to the growth of many ecommerce players.”

But Lundell thinks the solution isn’t that hard. Online retailers should have a mobile app. “A smartly designed app can in fact be a growth drive for the individual online retailer. Clothing giant H&M is a clear proof of this.” He had access to some undisclosed sales statistics of the Swedish fashion retailer and according to this data, one in ten visitors of the app buys something. Compare this with the average conversion rate for ecommerce, which shows that only about 2 out of 100 visitors purchases something.

‘Develop a mobile app’
He goes on by saying there are several things online retailers need to do and developing your own app is one of them. But there’s a downside to it. The development costs are very high. “It often costs several million kronor (1 million SEK = 106,619 euros) and that’s something many retailers don’t have the money for.”

“The result is that international ecommerce giants such as Zalando and Wish (in a short time a heavy hitter in Sweden) advance their positions at the expense of smaller Swedish players.” The question is, as a Swedish saying goes, whether avarice deceives the wisdom in this case. “For online retailers that don’t jump on the app bandwagon in time, Appageddon lies ahead.”