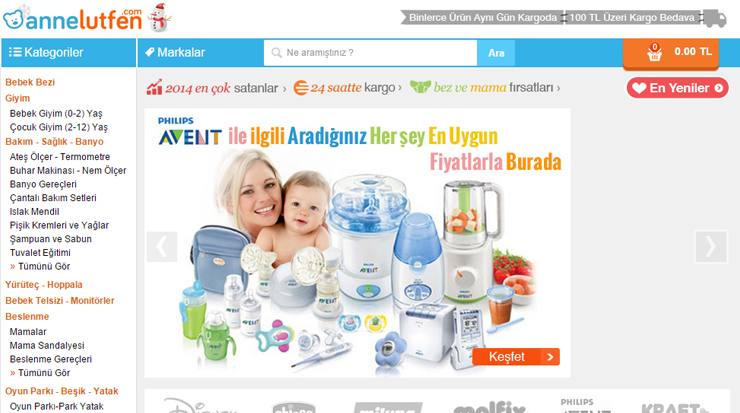 Annelutfen, a popular Turkish ecommerce site that is focused on the baby and mother market, announced the successful completion of a 4 million dollar investment (€3.35 million) led by Elixir Capital, a Silicon Valley-based private equity fund.

Founded in 2011 by Roys Gureli, Annelutfen offers a wide selection of baby products as well as clothing for children from ages 2 to 12, maternity products and toys. With the investment money, the Turkish ecommerce company wants to expand its online reach at an accelerated pace, using mobile products, big data strategies and original customer-centric content, as the press release says.

Growth potential in Turkey and the Middle East
According to founder and CEO Roys Gureli, Annelutfen’s platform brings technology-enabled solutions to an underserved market throughout Turkey and the Middle East, by following “examples set by Diapers.com and The Honest Company”. She puts emphasis on the fact there are 7 million babies born in the aforementioned region every year and Internet usage among parents continues to surge. She also notes the substantial growth potential of e-commerce (1% penetration in Turkey versus 10% in China, the US and Western Europe). “We are thrilled to partner with Elixir Capital whose experience and knowledge of ecommerce throughout Asia will help fuel the next phase of our company’s growth”, she adds. Arshad Ahmed, who’s Managing Director of Elixir Capital, says Annelutfen will form a cornerstone in the company’s trans-Asia ecommerce multi-market platform.