November 29, 2018 by Ecommerce News. About Statistics with tags The United Kingdom. 6645 views.

In the United Kingdom, commuters spend a lot while they are on the train. The value of on-train commuter commerce reached 2.9 billion euros last year and is predicted to grow by 75 percent to reach 5.2 billion euros by 2022.

KBH On-Train Media did some research in partnership with Retail Economic and found that 1 euro in every 25 euros of total online retail spend is carried out by people who are then travelling by train. And the average value of each transaction is 31.68 euros. In total, 51 percent of commuters shop online while they travel and 15 percent of the active shoppers buy on the train more than once a week.

According to the study, rail commuters account for 9 percent of the adult population in the United Kingdom, while they contribute 11 percent of total spending. Thus, commuters spend more per capita than the average UK household.

There might be several reasons why commuters are spending more and more online while they are travelling. The on-train Wi-Fi connectivity has increased, there are more and more smart devices and people are increasingly feeling like they are having some ‘me time’ when they are on the train. “They think of it as a convenient time to shop when they are not under any other time pressures.”

Commuters shop online because they have free time

This can also be found in the answers given by commuter who were asked what motivated them to shop online on trains. Most of them mentioned ‘free time’ (26 percent), ‘convenience’ (25 percent), ‘boredom’ (17 percent), ‘don’t feel time-pressured’ (13 percent) and ‘enjoy browsing for products while on the train’ (11 percent). 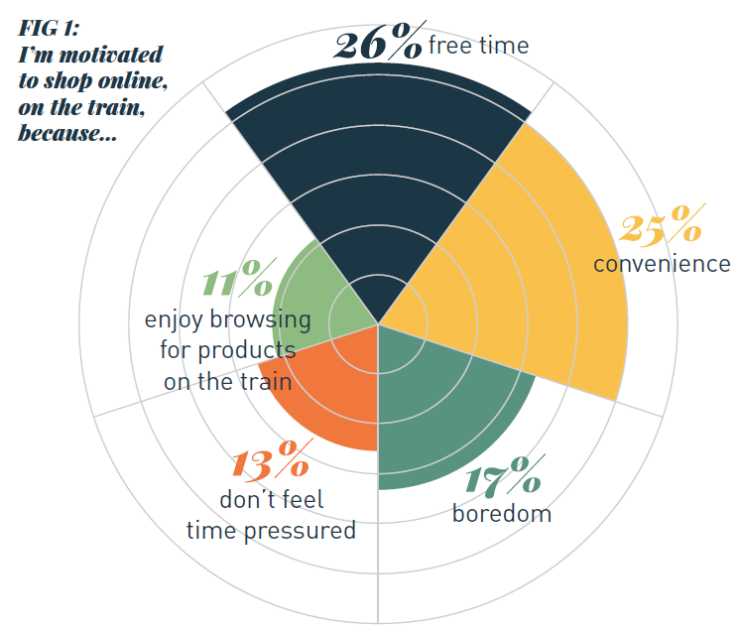 Shopping commuters order products online mostly in the evening, between 4 and 8 PM. The second most popular time was during morning rush hour, between 6 and 10 AM.

“The on-train audience is an economic power-house, punching way above its weight in terms of spend per capita”, Ian Reynolds, managing director of KBH On-Train Media said. “All the evidence points unerringly to the fact that successfully capturing the rail commuter market will play a significant part in retailer growth.”

He thinks, based on respondents’ answers, that commuter will shop more frequently on-train if there was better connectivity, but also when more retailers prioritize the mobile optimization of websites and apps to make the shopping experience more seamless.