UK and France account for 73% of European card fraud

Card fraud losses in Europe hit approximately 1.8 billion euros in 2016. The United Kingdom saw the highest losses. The value lost to fraud was worth 646 million euros in 2015, but increased by 9 percent to about 703 million euros last year. Together with France, the UK accounts for almost three-quarters of card fraud across Europe.

This is shown by the European Fraud Map, which is based on data from Euromonitor International and UK Cards Association. This interactive map shows the card fraud losses in 19 countries across Europe. Data shows that card not present fraud (CNP fraud) increased from 50 percent of gross fraud losses in 2008 to 70 percent last year. 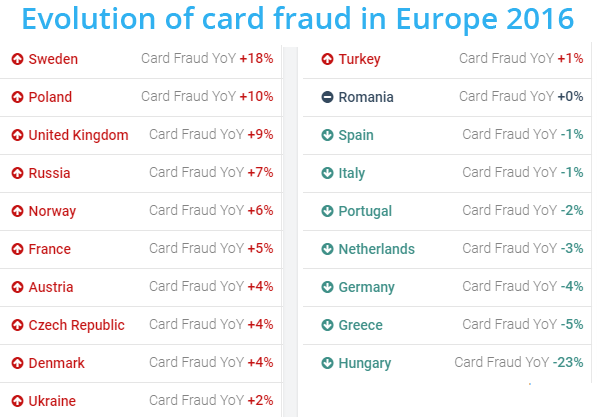 The card fraud rise in the UK was the highest in Europe in 2015, but last year higher rises have been found in Sweden (+18 year-on-year) and Poland (+10 percent year-on-year). In total, ten European countries saw an increase in fraud losses, while eight saw a decrease. Only the situation in Romania didn’t change compared to 2015.

“The growth in online spending and CNP fraud brings new challenges for banks and retailers, as criminals thwarted by chip & PIN have moved to a less risky channel”, Martin Warwick, senior consultant for fraud at FICO, said. “Hiding amongst the growth in online purchases is great from a criminal point of view, but finding and stopping fraudulent transactions just gets tougher.”