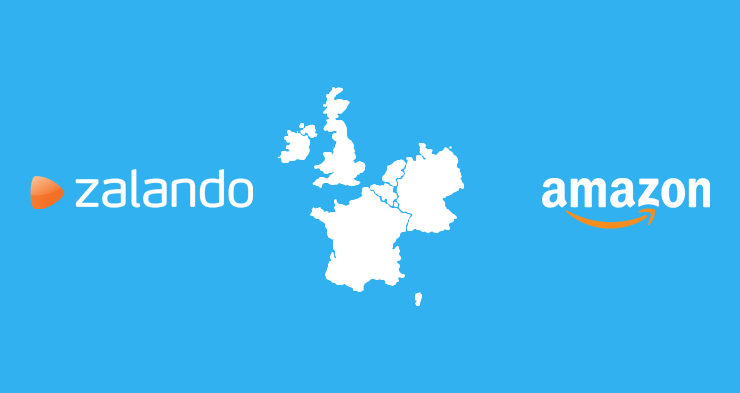 Zalando or Amazon, who will dominate online fashion in Western Europe?

Zalando, Amazon and Otto together account for 18 percent of the 40 billion euros online shoe and apparel market in Western Europe. For now, Otto Group is the market leader, with Zalando just behind, but Amazon could be the number one soon. The American company is ramping up its fashion activities in Europe.

Amazon is taking more of the online fashion market in Western Europe, Bloomberg writes. It now accounts for 5.7 percent of this market and is busy signing up famous models, socialites and brands. While market leader Otto’s share is declining, it went from 10 percent in 2011 to 6.2 percent now, Amazon and German fashion company Zalando are fighting who will be the next online fashion champion in Western Europe.

Zalando is fighting back

One thing is for sure: Amazon may be gaining market share quickly, Zalando is not giving up. The ecommerce player is building a warehouse in Paris, which will cut down the delivery time in France with a day or two, and it will also launched its first company-owned distribution center. This 375,000 square meter facility will be located in Poland and will handle deliveries to cities across Europe. Zalando has also increased the number of articles it sells by about a third, to 200.000.

It seems that for now, Zalando has an advantage over Amazon in Western Europe. The two ecommerce companies have about the same number of brands in Germany, but in the United Kingdom, Zalando offers nine of the top 20 womenswear brands, while Amazon stocks just four. And according to an analysis by Sanford C. Bernstein, much of what Amazon sold in Europe was “out of season and discounted”. Almost 60 percent of Levi’s products on Amazon UK and Amazon Germany were discontinued merchandise, while at Zalando it’s just 14 percent.