March 1, 2016 by Ecommerce News. About Statistics with tags Germany.

Zalando saw its revenue increase with 33.6 percent year-on-year, which is more than was expected. The revenue growth was due to a continued focus on customer proposition and reinforced by additional market opportunities. After a strong financial year, Zalando expects its revenue to increase by about 25 percent this year.

The revenue of Zalando was worth 2.21 billion euros in the financial year 2014 and reached 2.96 billion euros last year. Most revenue was generated in Germany, Austria and Switzerland, but that’s not where the most growth happened. The DACH region accounted for 28 percent of the growth Zalando went through, while the rest of Europe accounted for 40.5% of this revenue increase.

Zalando’s EBIT went from 82 million euros in the financial year 2014 to 107.5 million euros last year. The online fashion retailer wants to spend about 200 million euros this year, for acquisitions and opening another large warehouse. “We want to excite even more customers and gain further market share. We deliberately pursue growth while maintaining solid profitability”, management board member Rubin Ritter said in a statement.

Zalanod has been focusing more on mobile and app development, which has led to mobile traffic increasing from 48 percent to 60 percent year-on-year. App downloads went from 7 million in 2014 to 16 million last year. The number of active customers increased 22 percent to almost 18 million at year-end, and average orders per active customers (3.1) reached an all-time high. 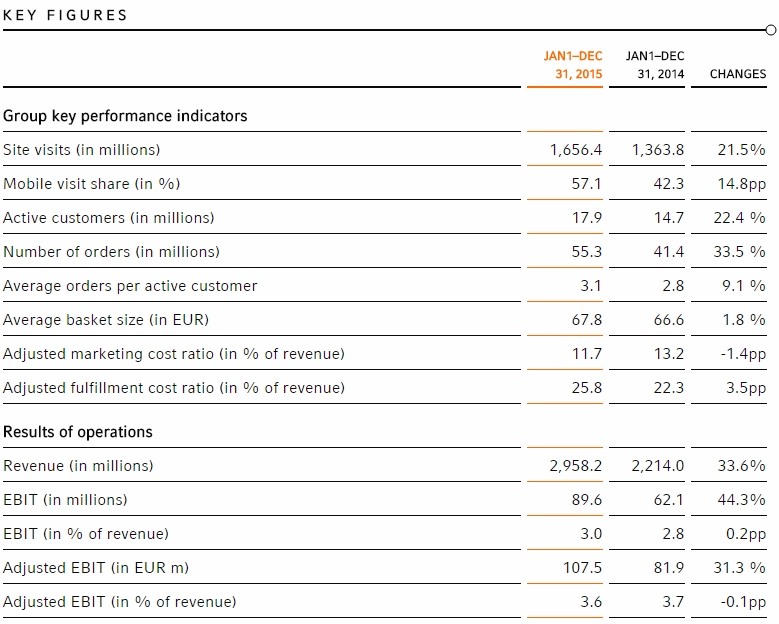