51% of UK ecommerce happened via mobile

February 25, 2016 by Ecommerce News. About Cross-channel, Mobile with tags The United Kingdom.

For the first time ever smartphones and tablets accounted for over half of online sales in the United Kingdom. During the period November 2015 to January this year, 51 percent of UK online retail sales took place using smartphones and tablets. This is a significant increase on the 45 percent share recorded in the third quarter of last year.

IMRG and Capgemini released figures on the online retail sales in the United Kingdom during the last quarter of 2015. It found out that the desktop and laptop accounted for 49 percent of total ecommerce sales, while the tablet was used in 33 percent of cases. The smartphone accounted for 18 percent. 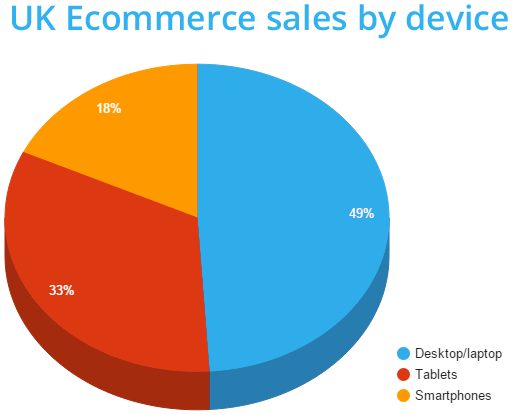 When looked at visits to ecommerce websites in the UK, mobile devices even accounted for two-thirds (66 percent) of traffic during this quarter, up from 63 percent in the previous period. And it’s eleven percentage points higher than the same period in 2014, when mobile devices accounted for 53 percent of visits to retail websites.

“Over the past year smartphones have really started to become a major component of the checkout process and that’s what is driving this leap in mobile penetration”, Tina Spooner, chief information officer at IMRG, says. “In January sales via smartphones grew 95.6% year-on-year for example – over 7x the rate of those via tablets.”

According to Richard Tremellen from Capgemini, the 51% of UK ecommerce sales that happened via mobile devices is a very significant milestone in the history of the online retail sector. “And it reflects the work retailers have put into improving the customer experience on smartphones. Not only have mobile platforms become more secure, but the payment process is also much slicker. The result is smartphone conversion rates that are 70-80% higher than this time last year.”