Bol.com the biggest online retailer in the Netherlands

September 22, 2016 by Ecommerce News. About Statistics with tags The Netherlands. 26549 views.

Bol.com is, in terms of revenue, the biggest online retailer in the Netherlands. It generated an estimated revenue of 730 million euros in 2015, way more than local competitors such as Wehkamp and Coolblue. Together with Zalando and Amazon these companies form the top 5 of biggest ecommerce websites in the Netherlands.

Bol.com was awarded with the unofficial title by Twinkle Magazine, which publishes a ranking of the top 100 online retailers in the Netherlands every year. This Twinkle100 is now extended with a ‘Tweede100’, a list of the numbers 101 to 200.

Other well-performing players are the online grocery of Albert Heijn (just like Bol.com owned by Ahold), Van Dijk Educatie (an online seller of school items), H&M, Media Markt and Nextail, the ecommerce branche of Blokker Holding. 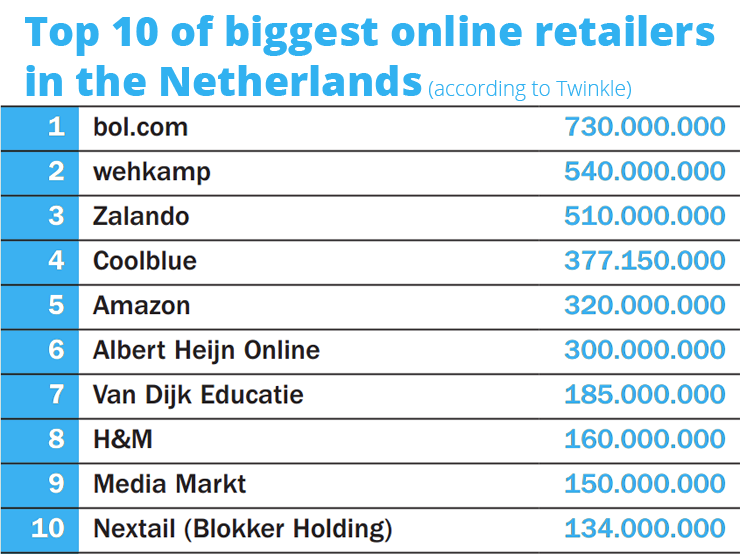 The Twinkle100 also took a look at some other data and found that 95 percent of the 230 online retailers it examined (the magazine also features a list of the 30 biggest retailers in the online travel industry) offers iDeal. This Dutch payment method is thus the most popular payment option offered by retailers. Mastercard and Visa follow suit with 91 percent of online retailers offering these payment methods. PayPal is being offered by 59 percent of the 230 ecommerce websites.