February 17, 2022 by Jasmijn. About Statistics with tags Belgium, Germany, The Netherlands. 4293 views.

Coolblue, the Dutch electronics retailer, made a revenue of 2,3 billion euros in 2021. That is 18 percent more than the year before. The profits turned out lower in the past year. This is due to investments, according to Coolblue.

Coolblue published their annual numbers today. The omnichannel player would go public last year, but decided to cancel the plans last-minute. Aside from its home country the Netherlands, the company is active in Belgium and – only since last year – Germany.

Their revenue grew to 2,3 billion euros – a difference of 18 percent compared to 2020. A quarter of this was made in Belgium. Coolblue therefore continues to grow. The EBITDA came down to 91 million euros. The year before this was 114 million euros.

The lower profits were due to investments towards German expansion, automation of their warehouse and the start of their own energy supplier. The label ‘Coolblue Energy’ now has 64 thousand Dutch customers. The goal is to reach 100 thousand customers in 2022, according to the press release.

Six new stores were opened, including the first German location in Düsseldorf. Coolblue now has 20 stores in total. Their own logistics network was also expanded in Germany, the Netherlands and Belgium. According to Coolblue, 90 percent of small orders in and around big cities are delivered by bike. Lastly, the number of employees grew from 6 to more than 7 thousand. 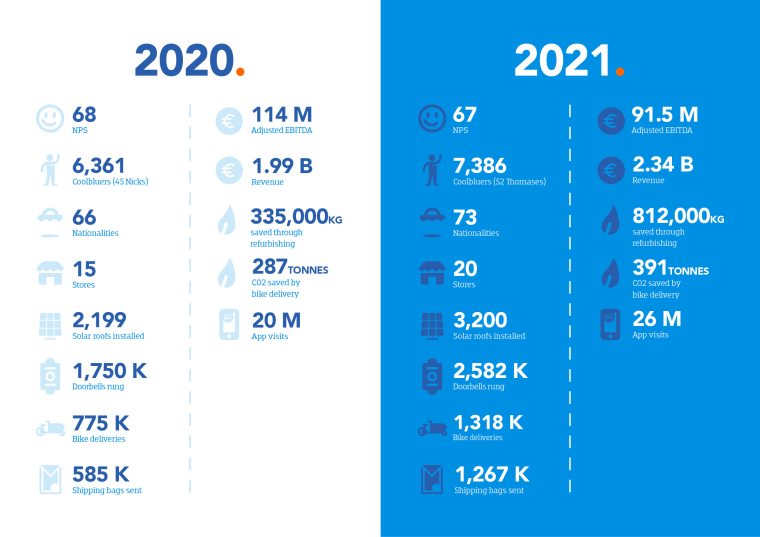 CEO Pieter Zwart of Coolblue says the retailer will continue to expand their delivery network in the Netherlands, Belgium and Germany. The company will also open more stores: “In Groningen, Den Bosch, Essen in Germany and at least one in Belgium.”

Zwart also mentions packing and bagging machines. The last is meant for paper delivery bags for small parcels by bike. Furthermore, Coolblue will continue to focus on the German market: “In 2025 we want to make more than 1 billion euros of revenue there.”

One of the biggest online stores in the Netherlands mentions nothing about an IPO. Coolblue was supposed to go public last year to finance further growth, but decided to cancel last-minute. According to the company it was due to unfavorable financial markets.