A survey among several European countries shows that it’s especially the Dutch and Irish consumers who are interested in fashion deals. Italians on the other hand, aren’t that keen on such deals. Of all 17 discount categories, coupon codes for women’s clothing didn’t make into the top 5 of most used discount codes for this country.

These are some of the findings from an analysis by coupon website Vouchercloud. It checked the data from its own websites in the United Kingdom, Ireland, Germany, France, Italy and the Netherlands. Based on the coupon codes consumers used last year, it shows that in Italy and Germany, as many men as women use discount codes. But in the Netherlands the difference couldn’t be any bigger, as 36.8% of the visitors is male, while 63.2% is female.

The average age of a coupon use isn’t that old; more than two-thirds of the Western European website visitors are between 18 and 44 years old. A good thing to keep in mind when an online retailer is handing out discount codes to its visitors.

Vouchercloud also checked in which product categories Europeans use coupon codes the most. An interesting find is that women’s clothing, and men’s clothing as well, is not very popular among coupon users in Italy. Whereas women’s clothing coupon deals account for 18.98% of all deals in Ireland, this percentage is only 7.28% in Italy. 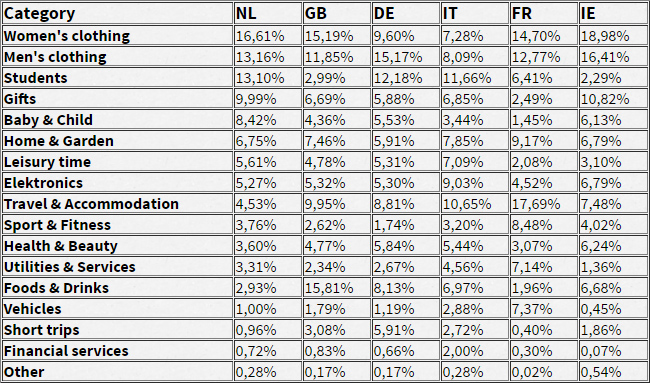 So, as you can see above, in the Netherlands the most popular categories are fashion, while in the United Kingdom consumers use coupon codes mostly for foods and drinks. In France, coupon codes are very popular among consumers looking for some discount on their vacations, as well as sport and fitness items.