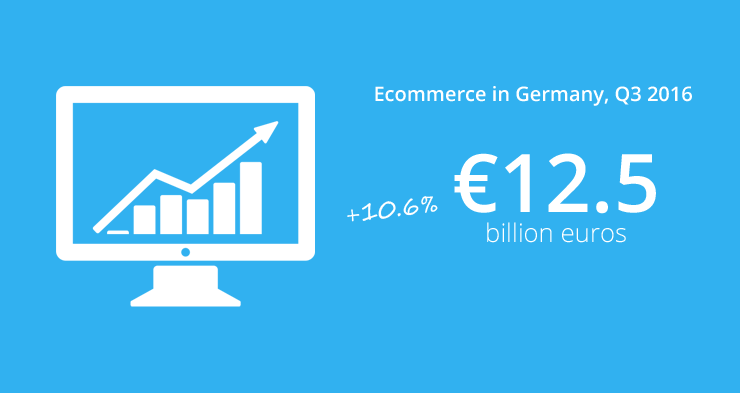 Ecommerce in Germany grew to €12.5 billion in third quarter

The online retail industry in Germany has increased by 10.6 percent during the third quarter. It’s now worth 12.5 billion euros. That’s more than expected, because the industry forecast for the full year has already been exceeded. Expectations are ecommerce in Germany will grow 14.7 percent this year, compared to 2015.

This annual growth forecast comes from the German ecommerce association Bevh, which recently started working together more closely with BVOH, that other online retail organization. Bevh gathered data from the industry of interactive retailers, which means retailers who are active in the online retail or mail-order business. This industry recorded sales of 13.7 billion euros, of which ecommerce generated 91.4 percent or 12.5 billion euros.

With the ecommerce industry growing 10.6 percent and the interactive trade 10.7 percent, this means the classic order channels, such as call centers or order cards in catalogs, have shown some growth.

Based on Bevh’s data, clothing accounted for the largest share of the total turnover in the ecommerce and mail-order industry. The clothing category represented 22.4 percent during the third quarter and was worth 3.1 billion euros. That’s 200 million euros more than in the same period last year. Other popular product categories are consumer electronics and IT (2.1 billion euros), furniture and deco (€960mn), shoes (€923mn) and household items (€905mn).

“The third quarter of this year shows that the development of ecommerce in Germany is accelerating again, as many experts have predicted”, says Gerrit Heinemann, who recently came up with a plan for what Europe can do against American retail giants. “Above all, the large-volume product groups are now moving into accelerated growth and once again inspire the pure players.”

Although the online and mail order industry is still being dominated by online marketplaces (6.4 billion euros), pure players continue to grow. With an increase of 24.2 percent this group generated sales of 2 billion euros, whereas it was 1.6 billion euros in the same period last year. Multichannel retailers recorded a total turnover of 4.7 billion euros.