June 30, 2017 by Ecommerce News. About Statistics with tags Hungary.

Ecommerce in Hungary was worth 427 billion Hungarian forints, or 1.38 billion euros in 2016. The online retail industry in this Eastern European country now accounts for over 5 percent of total domestic retail sales. In Hungary, more people are shopping online while the average basket value also increases.

These are the key results from new research conducted by eNET Internet Research, which based its data on responses by local online stores and presented the results during Ecommerce Hungary Conference earlier this month. 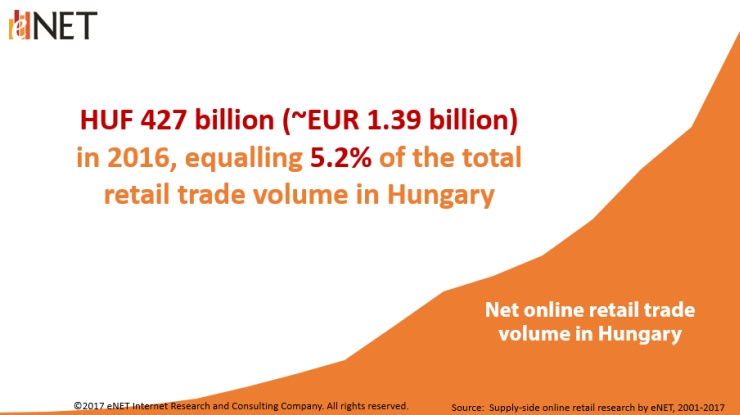 In 2015, ecommerce in Hungary was worth 319 billion Hungarian forints, which corresponds to 1.03 billion euros. So, last year the online retail industry increased by almost 34 percent. But it’s not only the size of the market that has increased, also the average cart value grew. Last year, online shoppers spent about 42 euros for an average online purchase, which is 5.5 euros more than they did in 2015.

These online shoppers in Hungary like to order products from categories such as IT & entertainment electronics, clothes, toys & gifts and white goods. eNET’s research also shows that delivery by courier services is still the most popular delivery method in Hungary. Other popular options are picking up orders at the store and the seller’s site or office.

Online stores in Hungary primarily offer cash payment upon delivery, bank transfer or cash payment in a physical store, site or office. In terms of the number and the value of orders, paying with cash when the orders are delivered is still the most popular payment option. Paying with bank cards upon delivery is gaining in popularity, though. Logistics suppliers are upgrading and expanding their services, so more couriers now have a POS terminal.