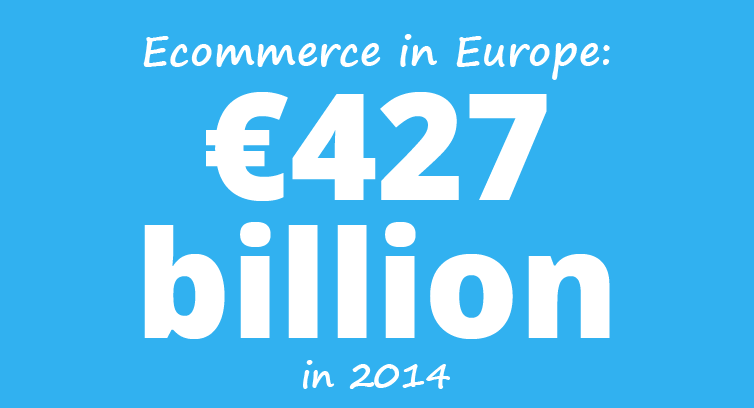 Ecommerce in Europe continued to grow significantly last year. The actual growth rate of B2C ecommerce of goods and services in Europe amounted to 13.9% in 2014, reaching 426.8 billion euros. Europe is still the second-biggest ecommerce region in the world. Only Asia-Pacific has a bigger ecommerce industry.

That’s one of the main conclusions from the new Global B2C E-commerce Report 2015, which is created by the Ecommerce Foundation. This pan-European online retail association found out that last year, 2.64% of the world’s GDP was spent on purchasing goods and services online. “At first glance, this does not seem as a lot, but this share has grown by more than 100% since 2010. This indicates the enormous growth of B2C e-commerce over the last few years”, says director Jorij Abraham.

Europe: the number two of the world
For now, it doesn’t look like Europe will be the number one shortly. In the more developed regions of Europe, around 75% of the population is connected to the Internet, whereas in Asia-Pacific only 39% is able to shop online. “In combination with the increasing income per capita and improving retail infrastructure, Asia-Pacific’s B2C ecommerce turnover is expected to rise even more strongly in the near future”, Ecommerce Foundation predicts.

The study also shows that in Europe, 273.9 million people shopped online last year. This is more than North America (195.5 million) but significantly less than Asia-Pacific (523.1 million). Europe also isn’t the number one in terms of the average spending per online shopper, as North America is clearly in the lead. On average, consumers from this part of the world spent 2.013 euros online last year, compared to 1.558 euros in Europe.

Ecommerce Foundation estimated the Chinse ecommerce market is the biggest in the world, followed by the American ecommerce industry. But behind these two major markets, the United Kingdom ranks third, with a B2C ecommerce turnover of 127 billion euros. The UK is the absolute number one in terms of average spending per online shoppers. Because last year, British online shoppers spent 3.073 euros on average. The French rank third with an average annual spending of 1,600 euros.

More ecommerce facts and figures can be found in the light version of the Global B2C E-commerce Report 2015, which can be downloaded for free. 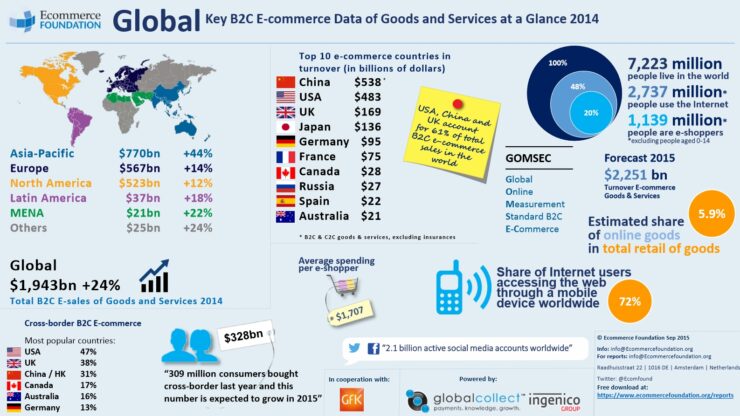 Disclaimer: The total turnover of ecommerce in Europe in 2014 seems to be bigger than it was (€423.8 billion) when we wrote an article about it back in June. This is because the researchers adjusted their estimates. The initial turnovers were also mentioned in dollars, but converted to euros using the average exchange rate of 2014 (€1 = $1,3285).