The European ecommerce industry has thus shown some significant growth, if you take into account the industry was worth no more than 307 billion euros five years ago. This is one of the many findings of the new European B2C Ecommerce Report by Ecommerce Europe. 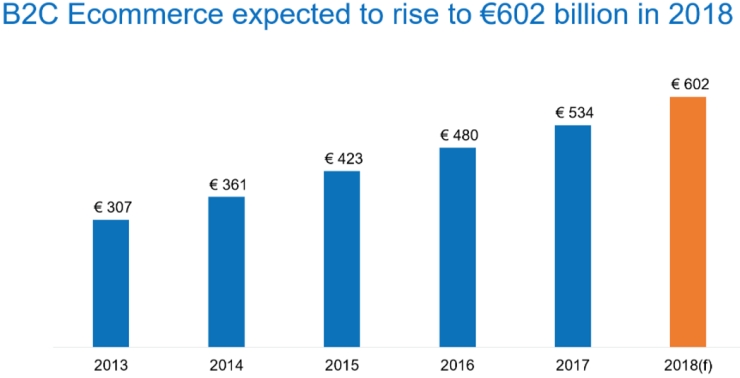 Most of the ecommerce in Europe is still being generated in Western Europe, which accounts for approximately 68 percent of total European online retail turnover. Southern Europe, Northern Europe and Eastern Europe show a much lower share of European ecommerce with 12, 8 and 6 percent respectively. But these are however the regions with the fastest ecommerce. Take for example Romania, where this industry increased by 37 percent last year.

The United Kingdom (€178 billion), France (€93.2 billion) and Germany (€93 billion) are, once again, the three biggest ecommerce markets in Europe. Together, they account for over two-thirds of the total European ecommerce turnover.

When it comes to their website ranking, Amazon and eBay are very dominant in Europe. But there’s a new kid on the block, one from Asia. Alibaba Group is slowly moving in from the Eastern countries, to take over the dominance of US marketplace giants Amazon and eBay.

Most cross-border shopping in Macedonia and Portugal

When it comes to cross-border online purchases, consumers in Macedonia and Portugal have the most, both with 85 percent of cross-border purchases. They are followed by Luxembourg (79 percent), Switzerland (64 percent) and Iceland (63 percent).

Slovenia has the highest cross-border online purchase growth rate, with 6 percent. That’s more than in countries such as Luxembourg, the Netherlands, Germany and Finland, that all showed a 5 percent growth rate last year.

In total, 38 percent of all online shoppers in Europe ordered abroad in 2017, with half of them ordering goods or services over the internet from sellers from other EU countries.