November 30, 2015 by Ecommerce News. About Statistics with tags Spain.

The ecommerce industry in Spain was worth 16.26 billion euros last year. About 18.6 million people bought something online, thereby spending on average 876 euros per year. One in five online shoppers used a smartphone or tablet to make purchases online.

A new study [pdf] conducted by the National Observatory for Telecommunications and the Information Society shows that the B2C ecommerce industry in Spain continues to grow, surpassing the revenue that was reached in 2013 by 11.3 percent. 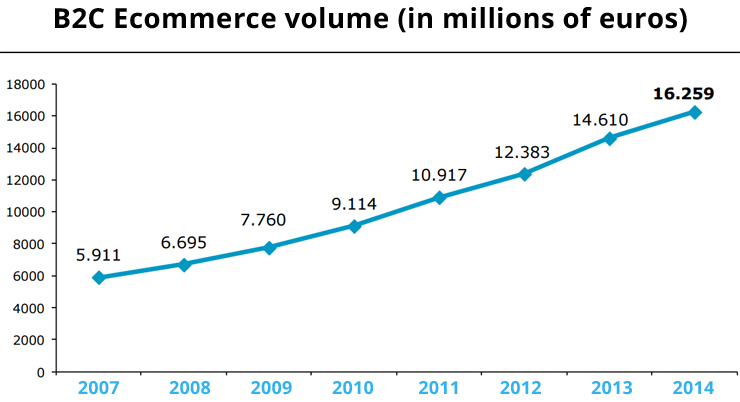 According to ONTSI, this increase is mainly due to an increase of the average spending per online shopping. Consumers in Spain spent 11.4 percent more than they did in 2013. Also, the increase of the number of online shoppers helped boost the ecommerce industry in the Southern European country; they now account for 76.1 percent of the Spanish population.

Most online shoppers in Spain are buyers between 25 and 49 years old and are living in urban areas which have more than 100,000 inhabitants. Consumers prefer to do their online shopping at home or while at work, mainly (61.4 percent) through websites that function as shopping channels. Another popular channel is the manufacturer’s website (46.2 percent). Stores with a physical presence ranked third (36.7 percent), followed by websites that focus on coupons and discounts (29.8 percent).

Transport tickets are popular to shop online
ONTSI also asked respondents what kind of products they bought online. It seems, with 43 percent, transport tickets is still the product category that’s purchased online the most in Spain, followed by clothing, accessories and sporting goods (39.2 percent), accommodation bookings (37.4 percent) and tickets to concerts and shows (36.7 percent).

Popular payment methods in Spain
Most online shoppers (64.1 percent to be precise) prefer to pay for their online purchases by using their credit card or debit cards. Online payment intermediaries such as PayPal are used by 25.3 percent of online shoppers, followed by cash on delivery (14.4 percent). 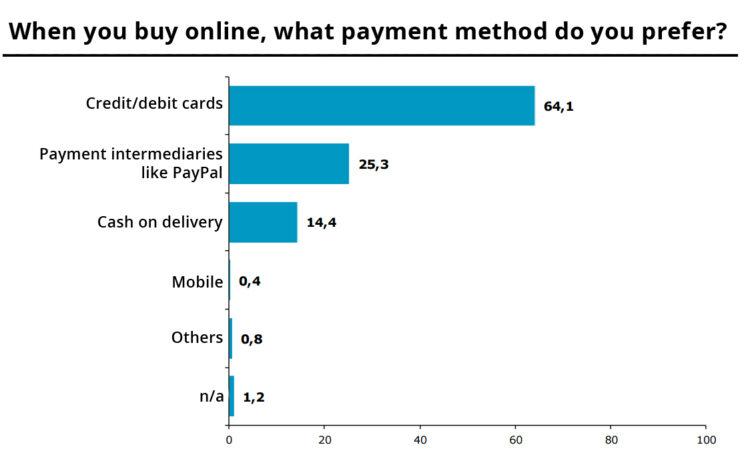 Back in July, the La Comisión Nacional de los Mercados y la Competencia published a study which shows that – according to them – ecommerce in Spain was worth 15.9 billion euros in 2014.