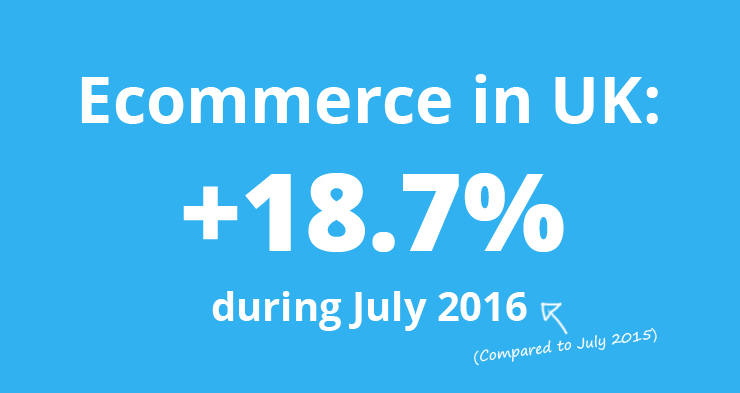 Online retail sales in the United Kingdom increased by 18.7 percent in July, compared to the same period last year. That’s the strongest performance since November 2014. The month-on-month performance of the British ecommerce industry remained flat from the previous month, the growth decreased by 0.4 percent.

The strong performance of the British ecommerce sector was driven by the apparel sector, where all sub-sectors outperformed the growth of the total market. These figures can be found in the IMRG Capgemini Sales Index.

July was a good month for British retailers in terms of the year-on-year growth of online sales, but the average order value decreased by 2.6 percent compared to the month before. IMRG thinks this is the result of heavy discounting motivated, in party, by retailers competing with Amazon’s Prime Day, held on July 12th.

22% growth for online clothing in the UK

As July was an extremely warm month, consumers seemed to have headed online more so they could shop some summer outfits. The clothing sector saw a 22 percent growth during this month, while sub-sectors like accessories (+33%), lingerie (+31%), footwear (+24%) and womenswear (+21%) all recorded above average yearly growth.

“Year-to-date, UK online sales growth is ahead of forecast at +15 percent year-on-year (forecast was for 11 percent) but, while we anticipate seeing double-digit growth continue during August due to a weak performance for the same month last year, 2016 is proving to be a tough one to predict”, says  IMRG’s chief information officer, Tina Spooner. “Particularly given the referendum result and the fact we have yet to record any significant impact from it in the Index so far, while some other economic indicators have already revealed some degree of impact.”