April 21, 2016 by Ecommerce News. About Statistics with tags The United Kingdom.

The Ecommerce Foundation released another ecommerce report on the state of ecommerce in an European country. Recently it already showed new statistics on ecommerce in Belgium and ecommerce in the Netherlands.

Today, the organization released its study on ecommerce in the UK. This report shows that over 43 million Brits shopped online last year, of which 20 percent used a mobile device for doing this. On average, the British online shopper spent 3,652 euros.

As said, the British ecommerce turnover is expected to increase by 10.5 percent and reach almost 174 billion euros at the end of this year. The growth rate has slowed down during the last couple of years, but this can be seen as a sign that ecommerce is only becoming more and more matured. 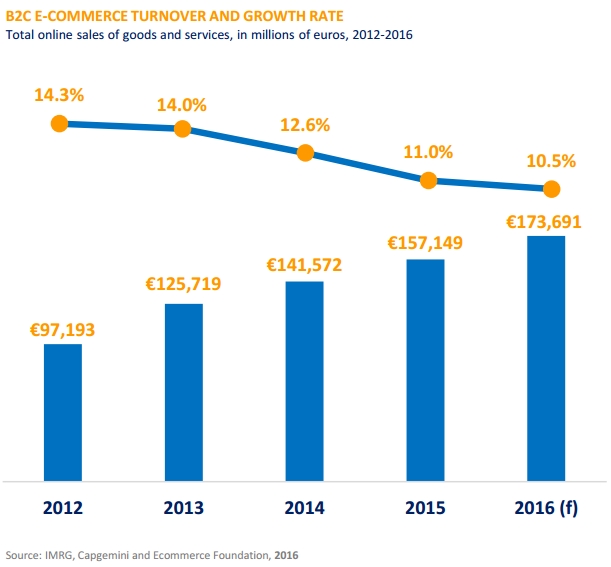 Popular products and services in the UK

Just as in many other countries, clothing is by far the most popular online category in the United Kingdom. Shoes & Lifestyle and Media & Entertainment are other popular product categories. When it comes to online services, travel is the service group where most money is spent by consumers. Flight tickets and hotels account for half of the market share, followed by package travel and private transport.

Mcommerce in the UK

Mobile sales accounted for 31.1 billion euros in 2015, which is about 20 percent of total ecommerce turnover in this European country. Last year, seven out of ten Brits who are 15 years or older used a smartphone. Back in 2012, this percentage was just 51 percent. Now, 65 percent of British adults own both a tablet and a smartphone.

Payment methods in the UK

When it comes to online payments, debit cards rule the market. Last year, 45 percent of British online purchases are made through debit cards. Electronic wallet such as PayPal (23%), credit cards (14%) and bank transfers (6%) are other popular payment methods.