In Europe, more and more consumers like to pay using their smartphone or tablet. In share of mobile device owners who already have experience with mobile payments, Turkey is the absolute leader in Europe. This is apparent from the latest report by yStats.com, called “Europe Online Payment Methods: First Half 2015”.

Mobile payments
The research company says that although Apple Pay has launched in the UK this summer, more Internet users in this country would rather trust their bank or PayPal to provide a mobile wallet. Nevertheless, mobile payments are on the rise. And in-store mobile payments via contactless technology are also gaining pace, yStats says. “For example, in France the number of retail locations accepting such payments reached more than a quarter of a million.”

Aside from mobile payments, the Hamburg-based market intelligence company remarks that in Europe, online shoppers show varying preferences for payment methods. For example, in Western European countries like the UK, France, Spain, Italy and the Nordics, card payments are very popular. But in the Netherlands consumers rely on local payment method iDeal, which holds more than half of the market.

Popular payment methods in Germany and France
And in Germany, it’s invoice and direct debits that accounted for a larger share of online sales than credit cards last year. More than half of German online shoppers (56%) paid by bank transfer after the delivery of goods, while 24% paid by bank transfer before delivery. A credit card was used by 20%, whereas that percentage was 21% four years ago. Online payment services like PayPal, Sofort Überweisung and Giropay have increased in popularity. Now they are being used by 55% of online shoppers in Germany (2011: 31%). 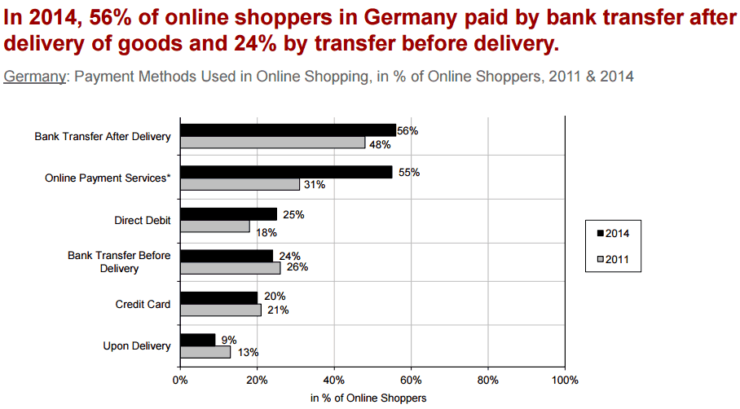 Via Twitter, yStats also shared some interesting data on the most used payment methods in France. During the first six months of 2015, the bank card remained the most popular method, as it was used by 81% of online shoppers. Online payment services were being used by more almost four in ten users, while a third of online shoppers in France used gift certificates during the first half of this year. 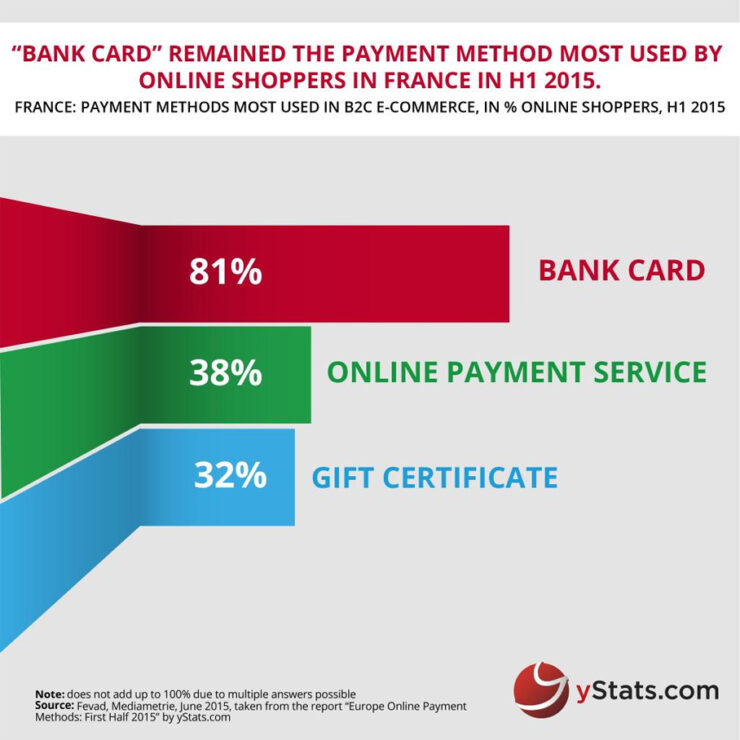 Payments methods in Eastern Europe
Other findings from the study show that in the Czech Republic and Belarus, over half of online shoppers paid by cash on deliver last year, while in Poland online bankt transfer happened to be the most popular payment method, followed by cash. In Hungary more than two thirds of online purchases were paid for on delivery, either by card or in cash. And in Russia, card payments overtook cash on delivery as the most popular payment method of last year although cash still ranks second.