May 25, 2016 by Ecommerce News. About Cross-border with tags Europe.

Online merchants in Europe still face barriers when they are selling abroad. Legal fragmentation, taxation systems, logistics and distribution are among the most difficult barriers to overcome for online merchants who are trying to expand their business cross-border in Europe.

That’s the conclusion from the Cross-border E-commerce Barometer by the pan-European ecommerce association Ecommerce Europe. After last year’s survey on ‘barriers to growth‘ of the online retail industry in Europe, the organization launched another barometer [pdf] amongst its European members at the beginning of this year. “It’s a useful tool to identify exact problems and assess developments in the ecommerce market following policy initiatives taken at EU level”, says secretary general Marlene ten Ham.

Ecommerce Europe received 585 responses from online merchants with a presence in several European countries. Among these companies, 61 percent are already selling cross-border and 14 percent are in the planning stage of selling abroad. The association also asked the companies who don’t sell cross-border what the reasons are for this decision. Mostly it was because of overly restricting regulations in other member states. For multi-channel shops who don’t sell cross-border the most important reason for not doing so was it’s not a strategic priority for the company. 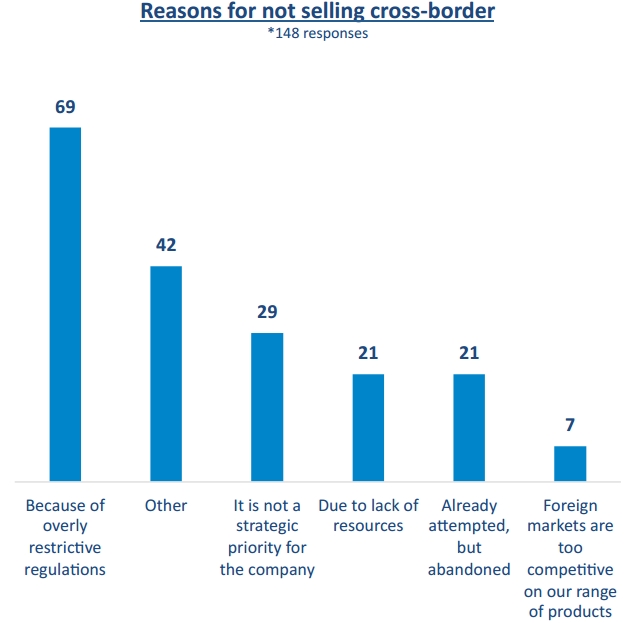 When asked how difficult it is to do cross-border business in Europe, one in three companies said it’s difficult, while 17 percent said it’s even very difficult. Only 13 percent declared that selling cross-border is easy, while 6 percent indicated it’s very easy.

Ecommerce Europe asked in which countries companies encounter the most difficulties. France and United Kingdom seem to be the most difficult member states to deal with. According to the association several reasons can account for this observation. “Such as the maturity of the UK market and perceived language barriers in France.” 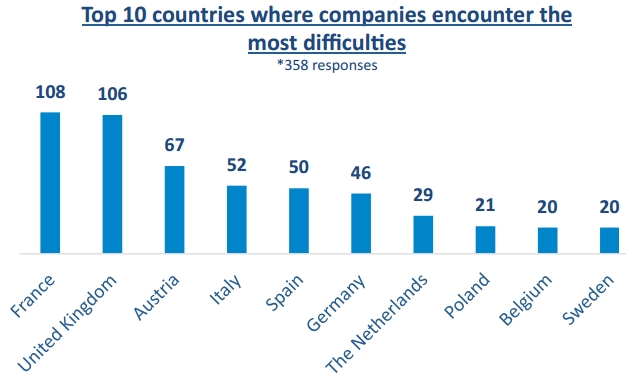 Differing legal frameworks, complicated and expensive taxation systems (VAT) and logistics or distribution issues still represent the top-3 barriers that online companies face when they sell cross-border in Europe, this was also the case in 2015. Differing legal frameworks across the EU is difficult for 59 percent of the companies that sell cross-border or are planning to do so. “Dealing with 28 different sets of rules for data protection, privacy, consumer and contract law does turn out to be burdensome for online merchants.”

Logistics and distribution represent a difficult barrier to tackle for 33 percent of the companies selling abroad. Compared to figures from last year (44%), the situation has improved, but online merchants indicate many barriers which still remain on quality and transparency of services.

Other barriers to cross-border ecommerce, as stated by the respondents, are online payments, language, marketing and client relationship.