Amazon’s marketplace is the largest of its kind. It’s attracting millions of consumers who shop on the Amazon website and get their products from third-party sellers. Now there’s a list that shows the global top 1,000 Amazon sellers as well as the top 500 sellers on Amazon’s European marketplaces in the United Kingdom, Germany, France, Italy and Spain.

The list is compiled by Webretailer, which did something similar with a list of the world’s top eBay sellers in February 2014. Now it has looked at the top Amazon sellers. These sellers are ranked by the feedback they received in the past twelve months. “So sellers of highly seasonal products shouldn’t be at an advantage.” 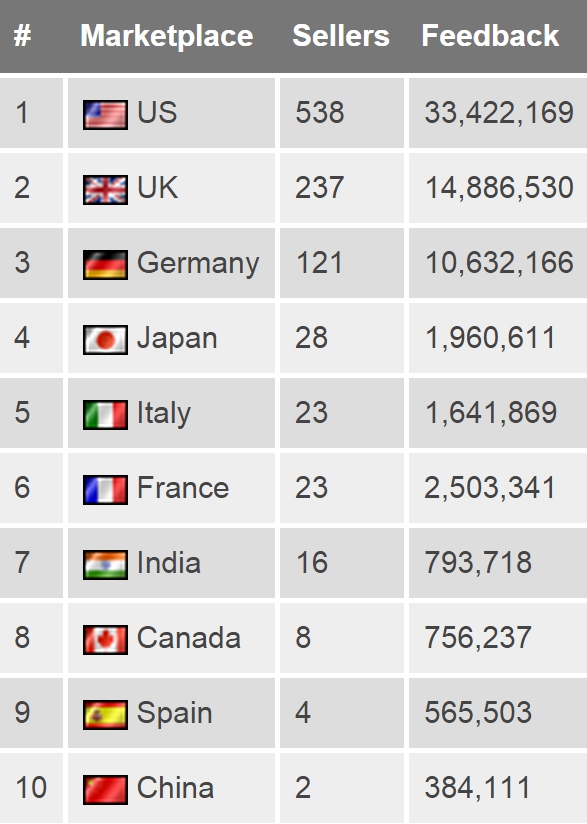 Cross-border ecommerce on Amazon
This gave Webretailer the opportunity to check out and see how much cross-border selling takes place on these marketplaces. In the top 10 there are some British and German sellers who only sell stuff to local customers, but on the third place we see KW-Commerce, that is based in Germany, while its biggest marketplace by feedback is Italy.

Webretailer says plenty of cross-border trading is going on. “But there’s also a surprising number of sellers who are sticking to just one marketplace. In fact, 45% of the 500 biggest sellers in Europe only sell on one marketplace.” But that means 55% does some level of trade across Amazon’s European marketplaces. “But are they doing it successfully? Well, 74% of those cross-border traders gained one-tenth or more of their feedback from outside their biggest marketplace. And 22% got more than half of their feedback away from their main market.”

Top Amazon sellers in Europe
Finally, the website looked at the top sellers on Amazon in the different European countries. In the UK the top 3 consists of All Your Music, Wordery and The Book House, while the top 3 in Germany is completed by reBuy reCommerce, Lets-Sell! and Tolle Unterhaltung. In France, Dodax-Online-fr, Nagiry and Buyus are the top sellers on Amazon, while in Italy this list consists of KW-Commerce, Compre Show and Membrane Store. And in Spain the top 3 is filled in by Bsuper Mart, KW-Commerce and Importscds-USA.