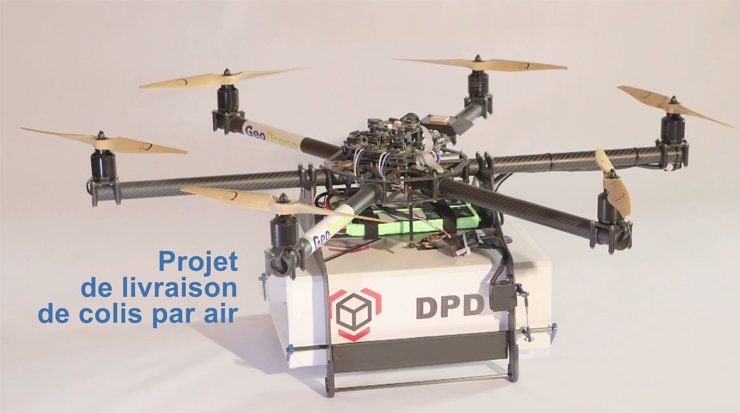 GeoPost, the express subsidiary of La Poste, is experimenting with drones. The unmanned helicopters are able to deliver a 4-kilogram package up to 20 kilometers away. In a video it’s shown how a postal worker attaches the package to a small drone, which then drops it at the recipient’s home and flies off, back to the postal company.

Geopost is testing its service in Pourrières, a commune in the Var department in the southern Provence-Alpes-Côte d’Azur region and this experiment will last three months. This location is perfect for the pilot trial, as the terrain contains steep roads, hillsides and desert zones.

Deliver parcels to consumers living in mountainous regions
The experiments were conducted at the Centre for Studies and Tests for Independent Models (CEEMA), with a device that’s equipped with six electric rotors. “We now know we can reach isolated areas quickly”, says GeoPost.  “This is very interesting, especially for emergency cases like medicine needs or blood supply.”

The drone is called Géodrone and it’s still not sure when the service will be in full operation. La Poste however has suggested that it maybe wants to use its Géodrone to provide service to residents living in remote mountainous and maritime regions, Gigaom writes.

DHL and Amazon are also testing drones
La Poste is not the only company that’s experimenting with this new mode of transport. DHL, a subsidiary of Deutsche Post, delivered medications on an island 12 kilometers offshore using a drone last September, while the American ecommerce giant Amazon is also experimenting with delivering goods this way.

GeoPost is a global courier express service provider and in their own words they are ranked number one in France and number two in Europe. In 2013, GeoPost saw its revenue grew by 9.1% to 4.391 billion euros.