December 14, 2020 by Ecommerce News. About Statistics with tags Germany.

Ecommerce in Germany is predicted to grow significantly in the coming years. After a corona-related record year with online sales somewhere between 80 and 88 billion euros, the trend will continue. It’s predicted that the online trade in Germany could be worth 120 billion euros in 2024, and maybe even 141 billion euros.

IFH Cologne has analyzed the future development of ecommerce in Germany and thinks that online retail will clearly benefit from the corona crisis. “During the last few months, more and more purchases have been made online. The online volume in German retail will be between 80 and 88 billion euros in 2020, which means that growth has at least doubled compared to the previous year”, it says.

In its projections for the next four years, IFH Cologne shows strong online growth that will continue. According to a trend calculation, ecommerce in Germany will generate sales of 120 billion euros by 2024, and with increasing growth, for example due to a sustained surge from the corona pandemic, even 141 billion euros.

Ecommerce in Germany could be worth 141 billion euros by 2024.

According to the calculations, the online share of retail will be at 16.5 percent in 2024 and could even rise to 19.4 percent in a certain scenario. 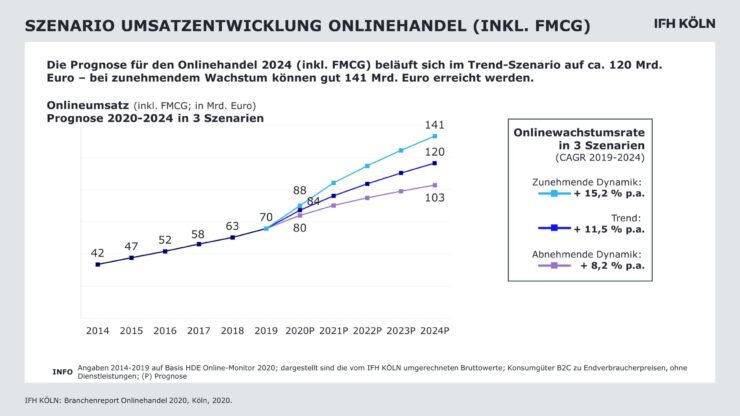