The German ecommerce industry grew 42% last year, so that it now is worth 39,1 billion euros. For the upcoming year a growth of about 25% is expected. Clothing is by far the most important product category in German ecommerce and women are a major source of revenue online.

A noticeable thing about ecommerce in Germany, is that a lot of orders are not taking place in standalone online stores, but via selling platforms like eBay or Amazon. Two third of all online sales takes place on these kinds of sites, followed by multichannel retailers, as The German E-Commerce and Distance Selling Trade Association (BvH) reports. The organization interviewed 40,000 German people last year to question them about their online spending. 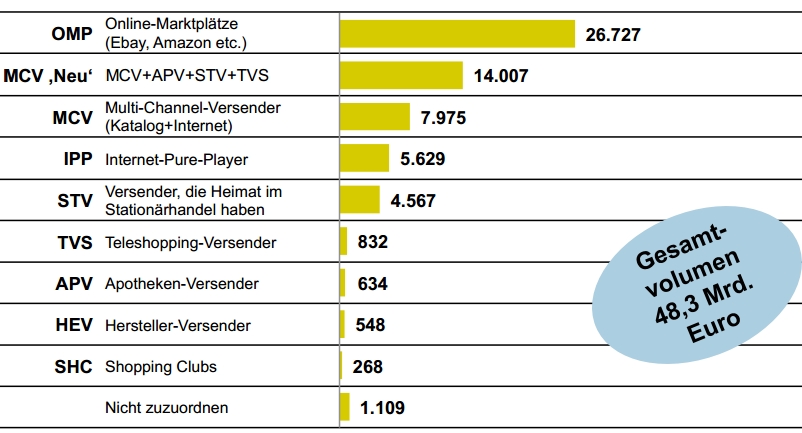 “The ecommerce industry in 2013 showed again a huge increase in sales. Our industry is a steady growth market in the German retail industry. In addition to increasing the purchase frequency and growing the number of shopping carts, especially the increasing number of online shoppers is a solid basis for this excellent result”, says Christoph Wenk-Fischer, chief executive of the BvH.

In Germany, there are more women than men who order online, as 53.4% of all online shoppers are female. They account for revenue worth of 25.8 billion euros, while men account for 22.5 billion euros. Women also generate the most revenue because of the larger shopping carts; they often order something online not only for themselves, but also for other members of the family.

With the aforementioned online revenue worth of 39,1 billion euros in Germany, digital goods aren’t included in the calculation. This product category (e.g. airline tickets and event tickets) has a value of 10.6 billion euros. and saw an increase in sales of around 9,3%.

Ecommerce Germany in 2014
In the report, BvH also looks at the future. It thinks the massive success of last year will continue in 2014. Current estimates are that the German ecommerce volume will grow by 24.8% this year, which corresponds to a turnover of 48,8 billion euros.