March 13, 2015 by Ecommerce News. About Cross-channel, Logistics with tags The United Kingdom. 8807 views.

British department store John Lewis delivered more online orders by click & collect than by home delivery for the first time. Last year about 54% of its online orders were delivered to the store for consumers to pick up.

More than half of online orders at JohnLewis.com were delivered to a physical store for pick up, in a year in which click & collect orders grew by 47% compared to the same time last year. Its online orders increased by 21.6% to almost 2 billion euros. The multichannel department store was able to fulfil over 6.4 million orders over the year with 98.7% of parcels in store the following day.

“We saw the significance of new ways to shop and changing customer expectations in two key shifts in consumer behavior”, the company says. “First, Click & Collect overtook home deliveries this year, and secondly, a new shape of peak trade was firmly established with Black Friday marking our busiest single day. Our distribution and online operations stood up well to the challenges and allowed us to deliver on a ‘logistics Christmas’.”

Multichannel department store
John Lewis has opened a new click & collect store at the St Pancras railway station as well as an airport shop at Heathrow store last year. Together with a flexible format store in York, sales at these stores “exceeded expectations”. John Lewis also bought more than 4,000 iPads so it could improve the customer services as well as give branches easier access to information. 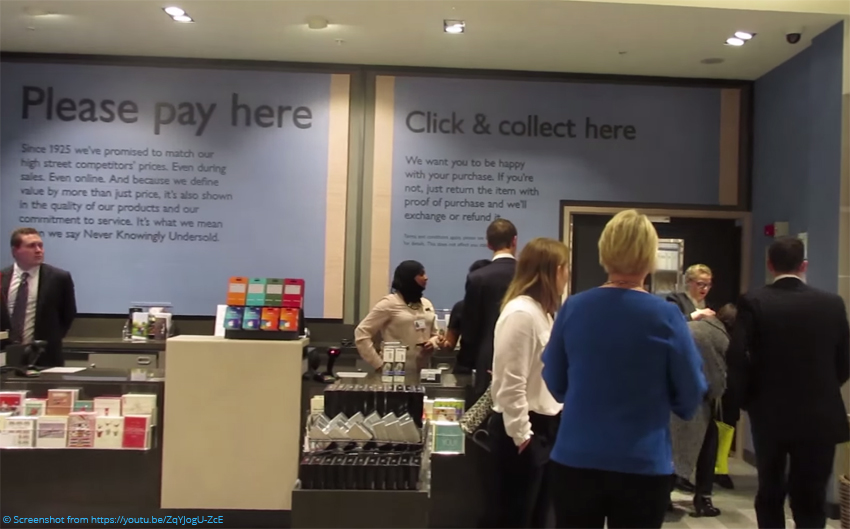 John Lewis Partnership, that also owns supermarket chain Waitrose, says it achieved a strong sales performance with increase market share in both Waitrose and Jown Lewis, with customer numbers up by 6% and 4% respectively. But whereas the operating profit of Jown Lewis grew by 10.8% last year, it fell by 23.4% for Waitrose. According to the company this is due to three factors:  “the impact of trading in a highly competitive and deflationary market; a significantly higher level of investment in the year; and the impact of one-off items, including property impairments and onerous leases.”