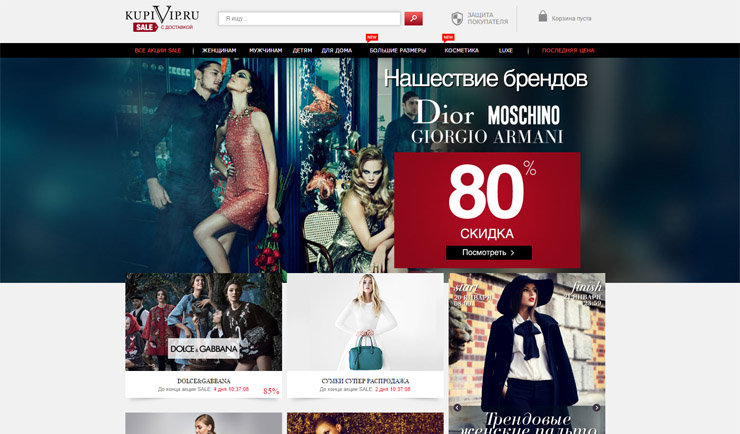 Things are going well for KupiVIP.ru. The online shopping club from Russia changed a lot at its website and company, but it has paid off. It began to break-even in earnings before interest, taxes, depreciation, and amortization and it closed last year with a revenue in the fourth quarter that has increased by 44% compared with the same period in 2013.

Vladimir Kholyaznikov, CEO and co-founder of KupiVIP.ru, says his company has benefited from the strategy changes, significant active users base growth, increased two-fold traffic to the website and the current market situation that caused changes in users’ behavior.  “Last year there was a reorganization in the internal structure of the company. We also consolidated our brands on a single platform, under the KupiVIP.ru brand.”

The online shopping club has also succeeded in the expansion of its sales territory to Kazakhstan and Belarus and optimizing the international logistics system. “All these changes helped us to cut operating costs and show strong sales growth thanks to a competitive pricing offer in the fashion segment.”

Growing numbers
There was also a significant increase in the number of active sellers on the KupiVIP platform. The number of suppliers that use this platform as a distribution channel has increased fivefold last year and this growth came from European countries as Germany, Italy, France, Turkey and the United Kingdom.

As a result, the product assortment expanded substantially last year. Now there are about 240,000 unique products and over 2,000 brands, from more than 800 suppliers from all over the world, that are on sale on a monthly basis. Some of the brands that offered their discounted products for the first time on KupiVIP last year are Hugo Boss, Adidas, Timberland and Oasis.

Plans to go cross-border more
The main purpose for the first half of 2015 is to maintain the high growth rates and overall high level of financial efficiency. “It is quite an ambitious plan, which we hope to implement through the development of our key business model—the international platform for liquidation of stock balance of fashion brands”, says Kholyaznikov. “It will be primarily implemented through significant increase in the number of new sellers in all key markets and marketing investment in the development of our key sales markets Russia, Belarus and Kazakhstan. The sales geography will then expand, primarily to Ukraine, Armenia, and later on – to Abkhazia and Kyrgyzstan in order to cover the whole territory of the CIS.”

About KupiVIP.ru
KupiVIP.ru was founded in 2008. The discount fashion seller operates as a platform where buyers get direct access to products by Western brands in different countries of the world. Company offices are located in Moscow, Saint-Petersburg, Berlin, Milan and Paris. According to the Russian edition of Forbes Magazin, KupiVIP.ru entered the top 20 list of the biggest Russian-speaking online shops.

The Harlem Shake hype once also hit the KupiVIP.ru offices…