The frequency of purchases made online in Denmark was down in the first quarter of this year. The amount of shoppers that bought five times or more in Q1 2013 has dropped by almost half, compared with the same period a year earlier.

There also seems to be a decline in the number of online buyers using a mobile device to complete their purchases. In the beginning of this year 13% of the consumers surveyed made a mobile purchase, while in Q1 2012 that percentage was 16%. Foreningen for Dansk Internethandel (FDIH) published these data in the April report ‘Dansk e-handelsanalyse’ (pdf). 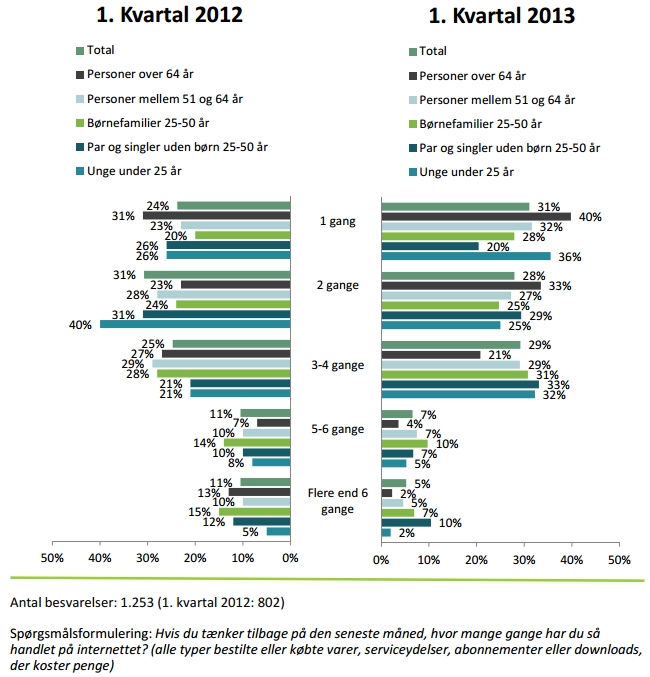 Approximately 31% of consumers in the first quarter of this year made one purchase per month, while 24% did this in the same quarter a year before. The decrease in frequency is especially noticeable in the proportion of shoppers buying five or more times in Q1.

Danish people first research online, then buy offline
What could be the reason for this decreasing frequency? Maybe it’s the increasingly complex shopping patterns in Denmark. Six in ten online buyers told the FDIH they purchased items in a brick-and-mortar store despite their familiarity with researching online, what they often do before buying items in a store. It seems to be that a lot of Danish consumers use the internet to research items instead of buying the items online.

All together, it must be known that a decreasing frequency doesn’t say a thing about declining ecommerce sales. Some consumers in Denmark made fewer purchases, but the value of total purchases is rising nonetheless. Its estimated that online sales in Denmark will reach some 5 billion euros this year, an annual growth of 12.4%. So, nothing to worry about in Denmark, although it may be a sign of something if there are less people now that order online multiple times per month.