October 4, 2017 by Ecommerce News. About Laws and regulations with tags Luxembourg. 8778 views.

Luxembourg has granted illegal tax benefits to Amazon of around 250 million euros. As a result, Amazon paid substantially less tax than other businesses. Because of this unfair tax advantage, the European Union has now ordered Amazon to pay back 250 million euros in taxes to Luxembourg.

The European Comission released a press release today, stating that Luxembourg must now recover the illegal aid. “They gave illegal tax benefits to Amazon. As a result, almost three quarters of Amazon’s profits were not taxed. In other words, Amazon was allowed to pay four times less tax than other local companies subject to the same national tax rules”, Commissioner Margrethe Vestager said. “This is illegal under EU State aid rules. Member States cannot give selective tax benefits to multinational groups that are not available to others.”

Because of the tax ruling, issued by Luxembourg in 2003 and prolonged in 2011, Amazon was able to shift the vast majority of its profits from Amazon EU, which is subject to tax in Luxembourg, to Amazon Europe Holding Technologies, which is not subject to tax.

‘Payment is less than expected’

Reuters says Luxembourg has rejected the finding and is now looking at its legal options. Amazon is considering an appeal over the payment, although it’s less than some had expected and also a small fraction of the 13 billion euros Apple had to pay to Ireland last year. 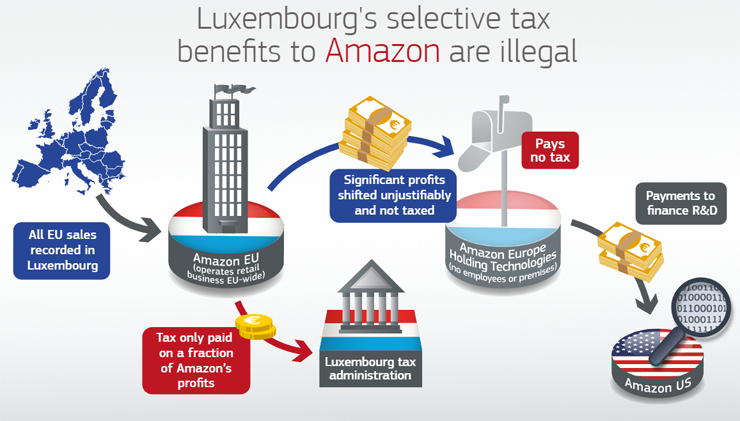