Magento 2 is finally here, but is it still relevant?

It took several years, but the developer beta of Magento 2 has finally been released. It will still take another year before merchants are generally able to use the new ecommerce software. So we asked ourselves if Magento isn’t too late with its next edition. Will Magento 2 still be relevant when it’s open to the public?

Magento is one of the most popular ecommerce platforms in Europe. Although it originally was launched by a California based company called Varien, and was later sold to the American company eBay, the open source software formula is popular worldwide and many ecommerce development companies in Europe are solely specialized in building online stores with Magento.

Magento 2 took some time to get an official release
But things changed. In 2011, eBay acquired Magento; first by buying 49% stake in the company and several months layer by acquiring the whole company. Co-founders Roy Rubin and Yoav Kutner remained the Magento leaders, but after less than one year, Yoav left the company. On Quora he explained his decision, but soon he deleted this. What he said however, may have had something to do with why Magento 2 took some serious time to get an official release. 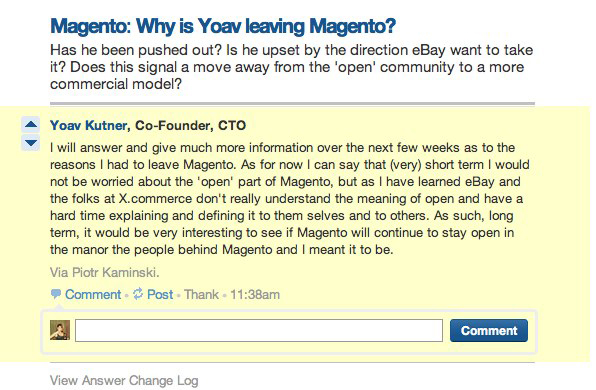 Is it related? Who knows. Official publications are never released but it’s a fact that Magento 2 had quite a delay! But now it’s 2015 and finally Magento 2 is about to see the daylight. On the official Magento website it says what eBay wants to achieve with this totally new release: update the technology stack, simplify external integrations, improve performance and scalability, streamline the customization process, enable easier installations and upgrades and deliver better quality, testing resources and documentation. “Magento 2 is the next-generation ecommerce platform designed to give developers a more powerful toolset to create innovative solutions that accelerate merchant growth.”

‘Magento 2 nothing more than a rewrite with jQuery’
But can Magento really be the next-generation platform with a more powerful toolset? One year ago, Danny Decker, partner of interactive agency Harlo Interactive, wrote: “I have tested Magento 2.0 dev60 and it is nothing more than a rewrite with jQuery. Magento 2 offers the same feature set as Magento 1. You’ll just need to pay a developer to migrate all your 1.x extensions to 2.x, since there is no upgrade path.” According to him Magento 2 does great things for developers, but “it does nothing to advance the merchants’ needs. Magento is missing the most important suite of marketing and sales automation tools.”

Although the extension issue seems to be solved, he might still have a point. Magento once was an established ecommerce software player, but while it was busy working on a total new version, this market matured and new players appeared and now offer almost the same features as Magento 1. Some ecommerce software companies seem to be even more ready for the future, as they have implemented social and mobile features seamlessly in their software.

Magento didn’t become this popular by just being another platform. It’s open source character, the wide range of possibilities and the immense user and development base make sure that Magento is the best, or at least be among the best, ecommerce platforms out there in 2015. With high-end clients like Nike, Christian Louboutin, Harper’s Bazaar and OfficeMax it’s secure to have another great year. But it happens to be in the online retail business and in this sector the future is far from certain. Delays are killing and fresh startups are always around the corner. Will Magento 2 be the next step in ecommerce, or is another great powerhouse slowly losing its wings and will the late launch of the sequel make room for other or even new players to gain market share?