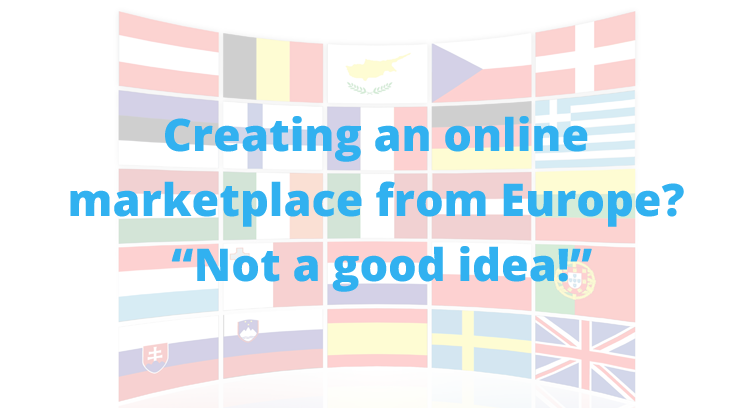 ‘Running an online marketplace from Europe: not a good idea’

January 27, 2016 by Ecommerce News. About Laws and regulations, Marketplaces with tags Europe. 8262 views.

Running an online marketplace from somewhere in Europe used to be very complex, with all the different tax rules. But since the beginning of last year each company that sells digital goods is forced to collect VAT based on the country of residence of each buyer. This didn’t make it easier. A European startup explains why.

Sergey Gerasimenko, who is the co-founder of global online course marketplace Eliademy, wrote an interesting piece about running an online marketplace from Europe on the website Nordic Founders. He starts by saying that startups from the United States have it easy. “For decades, Amazon is lobbying their interests to keep any product purchase online free of otherwise mandatory sales tax. […] Whether it is an online course, a book or an Uber ride, neither customer nor marketplace operator needs to care about sales tax.”

The people at Eliademy were sometimes faced with some complex tax problems. For example, someone from Russia created a course which was then being purchased by a German resident, while the transaction was handled by a company operating in Finland. The Finnish tax office decided that, despite individuals selling online goods to each other, each transaction had to be taxed as an online product sold by a Finnish company. That way, consumers from non-EU countries such as Russia or the US ended up paying 24% less compared to people from let’s say Finland or Germany.

But in 2015, things changed. A company that sells digital goods needs to collect VAT not according to a flat rate of their home country, but instead calculated based on the country of residence of each buyer. But if you use PayPal, there is no data about a person’s residence provided at any point in time. But the EU demands that, in this case, the marketplace has to collect at least two non-conflicting pieces of evidence about a buyer’s location. This could be an IP address, the location of the bank of someone’s credit card or the answer from a “Where are you from?” dropdown menu option. According to Gerasimenko, all of this data, for each transaction, has to be kept for several years on the backend and reported monthly to the tax office.

4 reasons why you shouldn’t run a marketplace from Europe
He ends his blog post with the four reasons why running an online marketplace from Europe is not such a good idea:
• Online goods which are being sold via your platform are more expensive to EU customers
• It forces startups to invest into a sophisticated system of reliable ‘residence detection’
• It substantially complicates UX and frequently scares buyers off
• It introduces a very high cost on accounting for both company and all EU member states