The top 100 retailers in Austria

The top 100 retailers in Austria generated sales of 38.7 billion euros in 2018. The ranking of Austria’s largest retailers is led by six companies that have exceeded the billion euros mark: Rewe, Spar, Hofer, Lidl, XXXL Group and Media Saturn. Together, they generate 32 percent of all retail sales in Austria.

The retail sector in Austria was worth 62 billion euros. According to data from Handelsverband Österreich, around 9 percent of retail-relevant consumer spending is made online. Ecommerce is especially popular in the category Books & Magazine. Here, ecommerce accounts for 29.3 percent of total sales. Consumer electronics (20.5 percent) and Clothing & Shoes (20 percent) are also popular ecommerce destinations. 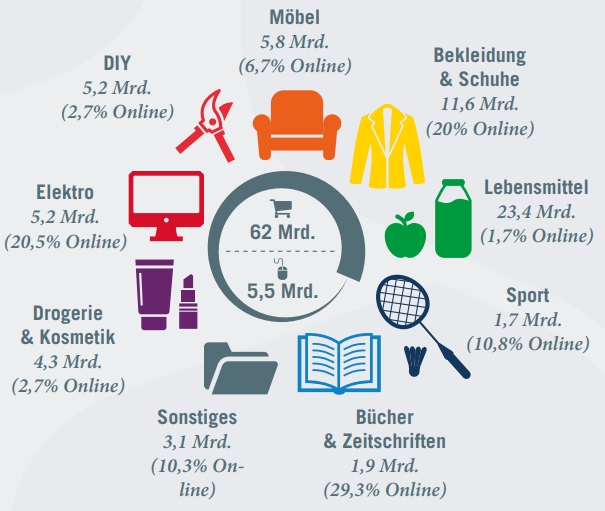 Many major players have online stores

When we take a look at the top 100 retailers in Austria, we also see many players that are active online as well. The top 10, which consists of five supermarkets, all have a strong online presence. There’s even a pure online player in the top 10, which is Amazon.

Last year, Amazon climbed from the 11th to 9th place, but now it ranks 8th with sales in Austria being worth 763 million euros (marketplace sales aren’t included). The company’s sales increased by 10.5 percent compared to the year before.

Zalando achieved an even more significant growth in Austria. The German company saw its turnover increase by half; from 230 million euros in 2017 to 342 million euros in 2018. It went from the 29th place to the 22nd place in the annual ranking of Handelsverband Österreich.

The retail association emphasizes that almost all major retailers in Austria also sell online. Only 18 of the largest players, don’t sell online (at least not in Austria). This includes some grocery stores like Nah & Frisch, and Nordsee), retailers in the lower price segment (like Primark, and Action) and a few other retailers, like Möbel Ludwig and Bauer.