This is shown by a survey conducted by YouGov on behalf of Ampersand. It asked over 2,000 adult consumers from the United Kingdom which delivery option they would most prefer to use. Over half of respondents said they would choose for next day delivery, followed by click & collect and same day delivery. 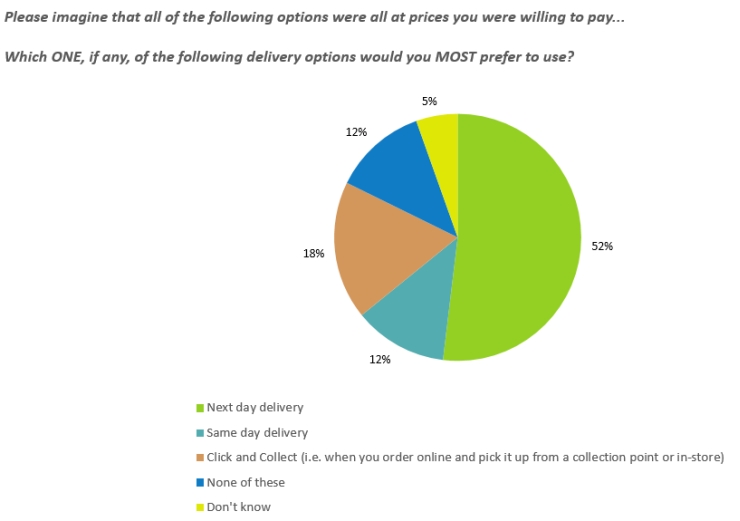 YouGov also asked respondents how much, if any, extra would they be prepared to pay for the different delivery options. For same day delivery, 34 percent didn’t want to pay anything, while 40 percent would pay up to 5 pounds extra. For next day delivery the proportions are somewhat different: Half of UK adults wants to spend nothing extra to have their goods delivered to them the next day, while 38 percent is willing to pay up to 5 pounds.

According to Retail Systems, consumers aged between 18 and 24 are the most likely demographic to pay for same day delivery, while those over the age of 55 were the least likely. Another interesting development is that the percentage of people who prefer same day delivery has almost halved since 2014 (from 21 percent back then to 12 percent now), while preference for next day day delivery has increased; from 46 percent in 2014 to 52 percent this year.

Focus on your next day delivery service

“The final mile has always been the part of the ecommerce journey that retailers had the least control over. Now, retailers such as Amazon and Argos — basically owners of their own logistics network — can offer customers same day, same morning, 2-hour home or office delivery”, Darryl Adie, managing director at Ampersand, explains.

“Other retailers have a lot to compete with. The bad news is that not every retailer can boast that kind of ownership. The good news is that they don’t really have to in order to give consumers great service. Focus first on your next day delivery service before offering anything else will put you at an advantage over many of your competitors that don’t offer a next day service.”