3 in 10 online transactions in Europe are mobile

Almost three in ten online transactions in Europe happen via a mobile device. In terms of mobile payments, the smartphone is more popular than the tablet. Especially in the United Kingdom, making online payments using a mobile device is popular.

That’s what multichannel payment company Adyen has to say about the mcommerce situation in Europe as well as the entire world. It has published its latest Mobile Payments Index, which gives a clear overview of the developments in the online payments industry.

Of all global transactions Adyen has processed in the first quarter of this year, 27.2 percent happened using a smartphone or tablet. That’s quite impressive when you keep in mind that during the traditionally high online spending period of Q4 last year, mobile transactions accounted for 25.8 percent of all transactions.

Tablet surpasses the desktop in terms of ATV
Although tablets aren’t particularly popular when it comes to paying online, the average transaction value of digital goods purchased via these kinds of devices has surpassed the figure for desktops and laptops for the first time since Adyen began publishing the Mobile Payments Index in June 2013.

When we look at several regions, it shows that in the US 26.7 percent of payments online were being made on mobile devices, while this percentage was about 20 percent in Asia and 28.6 percent in Europe. In terms of individual markets, the United Kingdom stands head and shoulders above the global averages. During the first three months of this year, 44.4 percent of online payments in the UK were made using mobile devices, with smartphones accounting for 66 percent of that figure.

Mobile channels experienced impressive uplift
“Tablets may well be approaching market saturation but thanks to retailers and businesses focusing on optimizing the payment process for the channel, they are attracting increasing spend as consumers become more comfortable using these devices to pay for things online”, said Roelant Prins, Chief Commercial Officer at Adyen. “There has been a seismic shift in how and where people are comfortable spending money. All mobile channels in the past 12 months have experienced impressive uplift.” 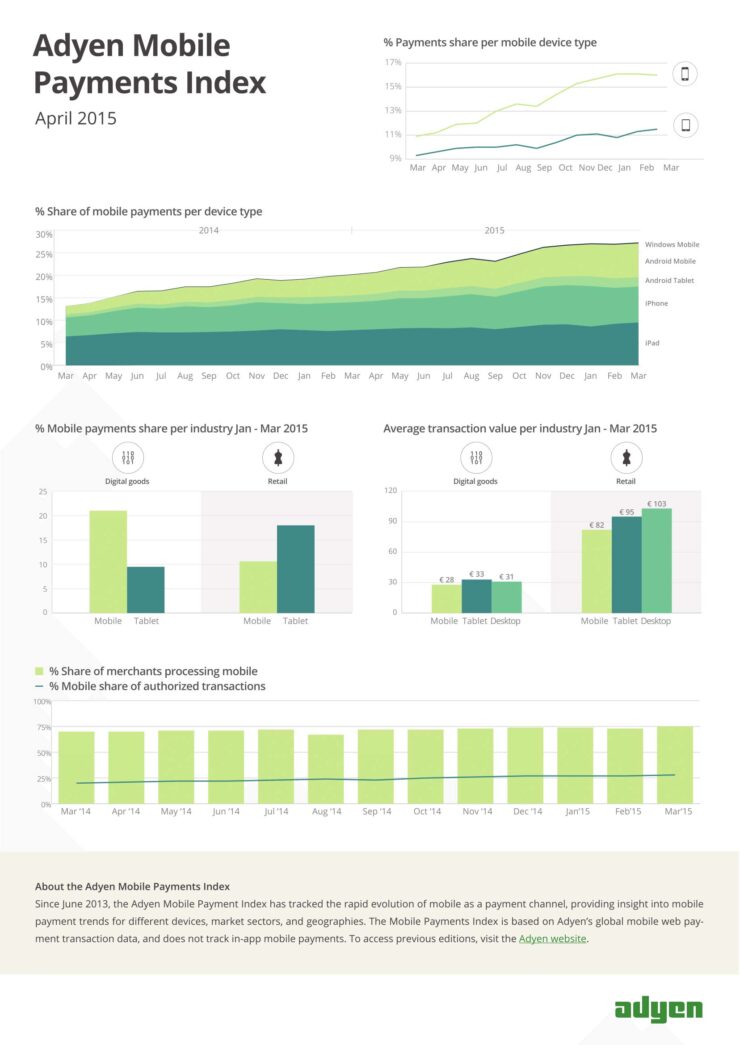