58% of European checkouts have multiple errors

June 9, 2020 by Ecommerce News. About Payments with tags Europe.

Analysis shows that 58 percent of European checkouts have at least three basic errors, which could complicate the checkout process for customers. Many online stores don’t automatically verify the card number or they let customers attempt to pay with an expired card date.

Stripe reviewed the top 450 ecommerce websites across the UK, France, Germany, the Netherlands, Spain, Italy, and Sweden. It found that 58 percent of European checkouts had at least three basic errors. “This adds unnecessary friction for customers and complicates the checkout process”, the company explains in its study [pdf].

These errors add unnecessary friction for customers and complicate the checkout process.

Most common errors on checkout pages

These are some of the most common errors found at checkout pages:

“On their own, these issues may seem small. But, when combined, they add up to a needlessly difficult checkout experience for customers”, Stripe comments. According to the company, checkouts in Italy and the Netherlands performed the worst for many of the factors it assessed.

Checkouts in Italy and the Netherlands performed the worst for many factors.

Entering card numbers with or without spaces

But with regards to checkouts allowing the card number to be entered without spaces, the Netherlands performed the best. Checkouts in France performed the worst, with about four in ten not accepting numbers without spaces. “Customers should be able to enter card numbers how they want (with or without spaces) and not encounter any errors”, Stripe thinks. “Although it is recommended, however, to allow card numbers to be entered with spaces, or visually separated into groupings of four digits, for easier data validation.”

Another interesting finding is that although 96 percent of checkouts adapted to mobile screen sizes, only 12 percent of these pages supported mobile wallets. And there were more problems with mobile devices. 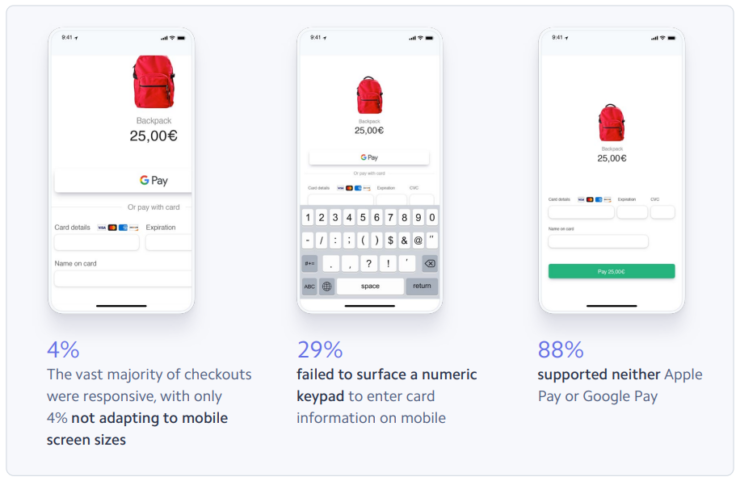 Another problem with many ecommerce checkouts is that they aren’t translated into local languages. Also, 81 percent of all European checkouts didn’t offer local payment methods like iDeal, EPS, P24 or Bancontact.

Regarding these two topics, there were again big differences across the countries. In Spain, none of the analyzed checkouts were translated into other languages or offered local payment methods for consumers elsewhere in Europe. But in the Netherlands, checkouts were most likely to be available in other languages. Here, local payment methods were also not very popular.