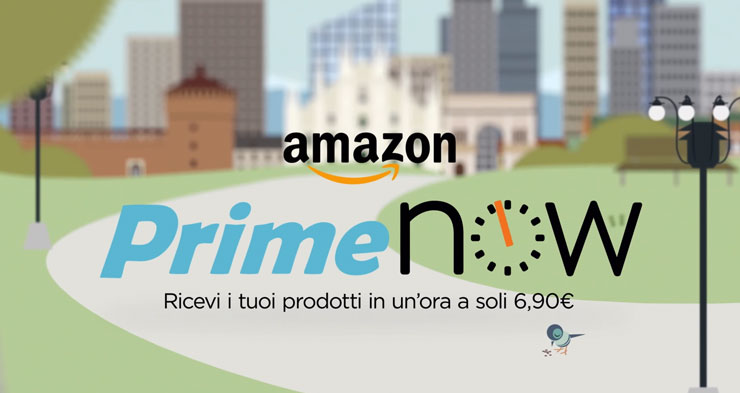 Amazon has launched its one-hour delivery service, called Amazon Prime Now, in Italy. Consumers who are Amazon Prime members can schedule a same-day delivery for free and have goods delivered within the hour for 6.90 euros. Italy is now the second European country to offer this Amazon service, after the United Kingdom got the scoop in July.

Do you want to know more about Amazon in Italy and the rest of Europe? Check out our extensive page on Amazon in Europe.

The new service was announced by Amazon on its Italian website. There, the American retailer explains that the service is, at least for now, only being offered in Milan and the surrounding areas. Amazon has implemented a similar strategy when it launched Amazon Prime Now in the UK; it first started in (parts of) London and a nation-wide rollout will probably happen only if Amazon is happy with the results it achieves locally.

Order over 15,000 products including food
“Amazon Prime Now is the new service reserved for customers who are an Amazon Prime member. With Prime Now you can place orders via the dedicated app and receive them within one hour at a cost of €6.90 per order, or in a scheduled 2-hour window for free “, the ecommerce company explains on the website. The minimum order for using Amazon Prime Now is 19 euros. The newly launched service can be used for over 15,000 products, which also includes food. The latter is possible, since Amazon Italy launched its food section (with same-day delivery) back in July.

EcommerceBytes.com has found out via a local Italian newspaper that the goods ordered via Prime Now don’t come from a distribution center in Piacenza, but from a warehouse in the neighborhood of Affori; the orders are prepared in fifteen minutes.