There are very different preferences amongst consumers in the United Kingdom, France and Germany when it comes to the delivery of their packages. For example, the majority of online shoppers in the UK have been using click and collect in the last 12 months, while French consumers like to pick up their goods at a local store.

This is revealed by new research, commissioned by MetaPack. It shows that 63% of online shoppers in  the United Kingdom have uses click and collect in the last twelve months, while this percentage is much lower in these other two major European ecommerce countries. In France, 43% of consumers used click and collect, while in Germany it’s only 26% of consumers surveyed.

In France, it looks like picking up the delivery from a local shop is much more desirable, as 72% of the inhabitants said they chose this option in the last twelve months. In Germany (30%) and the UK (25%) this option is significantly less popular.

When we look at widely uses delivery options in German, we’ll see that one in two local shoppers had used a locker service to get the products they ordered online. In the UK and France the usage of this delivery service is way lower, with respectively 10% and 9%.

Offering enough and qualitative delivery options is key for retailers. Equally big majorities (89% of Britons, 84% of French and 83% of German consumers) said they would choose an online retailer over others offering the same product because of a positive delivery experience.

The survey used a sample of 1500 consumers from France, Germany and the UK. 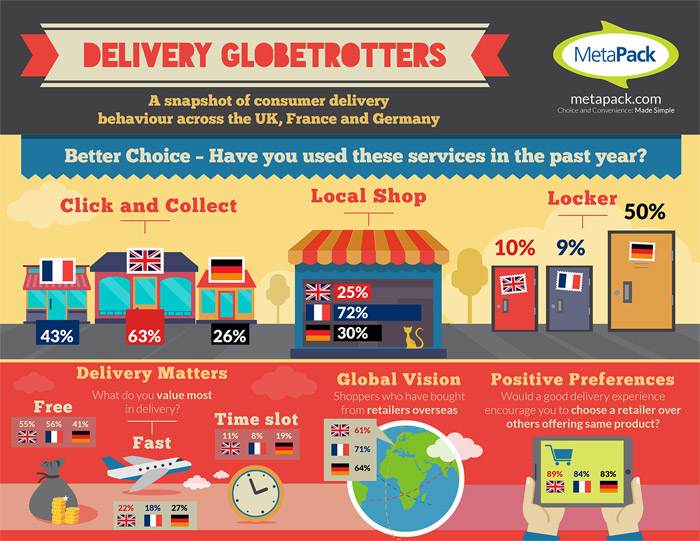