A double digit growth rate above 10% in B2C ecommerce sales in Western Europe is expected for 2013. Total ecommerce sales in this region are expected to reach over 300 billion euros by 2016, as cross border shopping continues to gain popularity among European consumers.

This is indicated by a new report from research company yStats.com, called ‘Western and Central Europe B2C E-Commerce Report 2013‘. It also believes the growth rate of the Western European ecommerce will decrease by 2017. But cross border shopping on the other hand will rise, as it now reaches over 10% of online shoppers in 2012 and an expected doubling of that percentage by 2015. 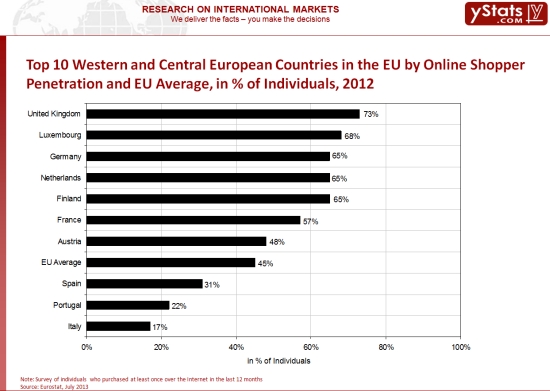 Ecommerce Germany
The research company looked further into the ecommerce industries of several European countries, like Germany and the United Kingdom. Germany’s B2C ecommerce sales reached ‘several tens of billions of euros’ last year and showed double digit growth over 2011. The most used payment methods for online shopping are invoice and PayPal, a trend a lot of European countries don’t share as bank card are often the most popular method in these countries. yStats.com also notes that online retailers in Germany benefit from popularity with shoppers in neighboring Austria.

Ecommerce The United Kingdom
As far as the United Kingdom is concerned, the sales in this country reached a ‘significant double digit figure in billions of euros in 2012’, and further growth is expected. B2C ecommerce sales are mostly driven by the ever increasing popularity of mobile commerce. Big online players like Amazon, Argos and Tesco all have a decent share of traffict generated through mobile.

Ecommerce France
B2C ecommerce sales in France reached about half a hundred billion euros and thereby reflecting a double digit growth in 2012. Here, Amazon is also one of the big guys, with competition from Cdiscount, La Redoute and FNAC. The ecommerce market in France is diverse, as the top 10 account for less than half.