Dutch pick up service De Buren will work together with bookstore chain Bruna. As a result, consumers will be able to pick up, deliver and return parcels at the branches of Bruna 24 hours a day, 7 days a week.

Bruna has more than 400 physical locations in the Netherlands. It’s unclear whether the two companies intend to have unmanned lockers at all of these locations, but De Buren and Bruna say they intend to make “as much as possible” shops ready for the new service. Pilots will start in Amsterdam, Rotterdam and Venray later this month.

“This partnership with De Buren fits perfectly into our strategy to improve our service through innovation and strategic partnerships”, says Fred Zeegers, general manager of Bruna. “We have been working on our omnichannel strategy, where we link our traditionally strong network of shops with the new opportunities the internet has to offer. De Buren also acts between the digital and physical world, so it seems like a perfect match.”

For De Buren, the collaboration with Bruna is a huge step forward in achieving a national coverage with more than 1,000 collection points. The company, whose name means ‘the neighbors’ in Dutch’, partnered with parcel delivery companies DHL and TNT last year. But instead of opening new pick up service stations, the deal meant the existing collection points from De Buren were now also available for these logistics companies.

For Bruna, the partnership with De Buren hopefully means more consumers will find the Bruna shops and decide to purchase some books, magazines or office supplies there. Last year, the company published its annual results and recorded a €3 million loss, while having generated a turnover of 425 million euros. Still, Zeegers think the Bruna have done relatively well out of the crisis. Other book sellers saw their revenue decrease by tens of percentage, while this was much less the case for Bruna. 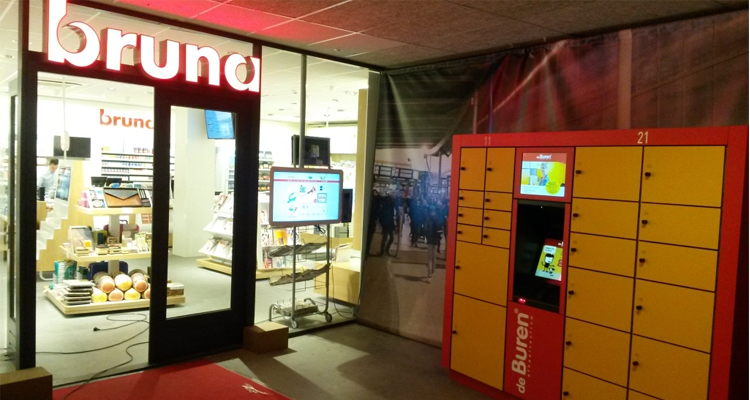