May 2, 2019 by Ecommerce News. About Cross-border, Statistics with tags The Netherlands. 5812 views.

Consumers from the Netherlands have spent about 1.6 billion euros at foreign online stores that are located in the European Union last year. That’s an increase of 17 percent compared to the situation in 2017.

That growth rate of 17 percent is nice, but it’s less than in previous years, Dutch statistics agency CBS has revealed. For its research, the organization looked at online purchases of goods by Dutch consumers from companies located within the European Union but outside the Netherlands. 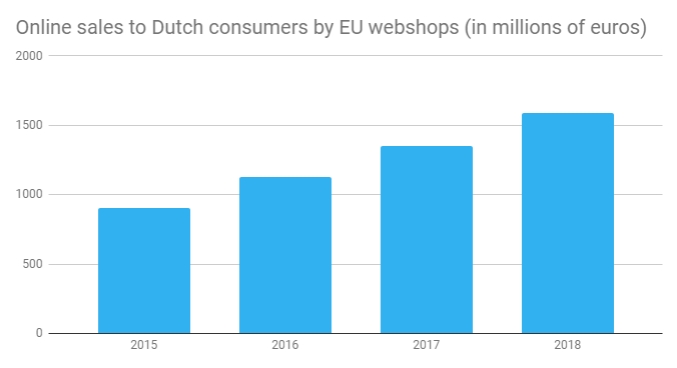 Meanwhile, online stores located within the Netherlands saw their online sales increase by almost 18 percent compared to the situation in 2017. That’s a slightly bigger revenue growth than the one achieved by European online stores selling to Dutch consumers in the same period.

The pure players (online-only retailers) in the Netherlands saw their revenues increase by almost 13 percent last year. Among Dutch retailers that sell both online and offline the revenue increased with 26 percent.